Today I went to Batelle Darby Metro Park, scouting out the place for tomorrow’s class field trip.  There are trees there. Who knew? As Gabriel Popkin explained so well in her article (LINK), a lot of otherwise well-educated people are “tree blind.” I’m a botanist, so I guess I’m somewhat less tree blind than most folks, but still have a lot to learn, especially about oaks and hickories …and pines …and hawthorns, and…

American sycamore is also a lowland tree, occurring mainly along rivers, but it also does well as a street tree, perhaps because of similar stresses, namely low oxygen concentration in the soil around the root system. 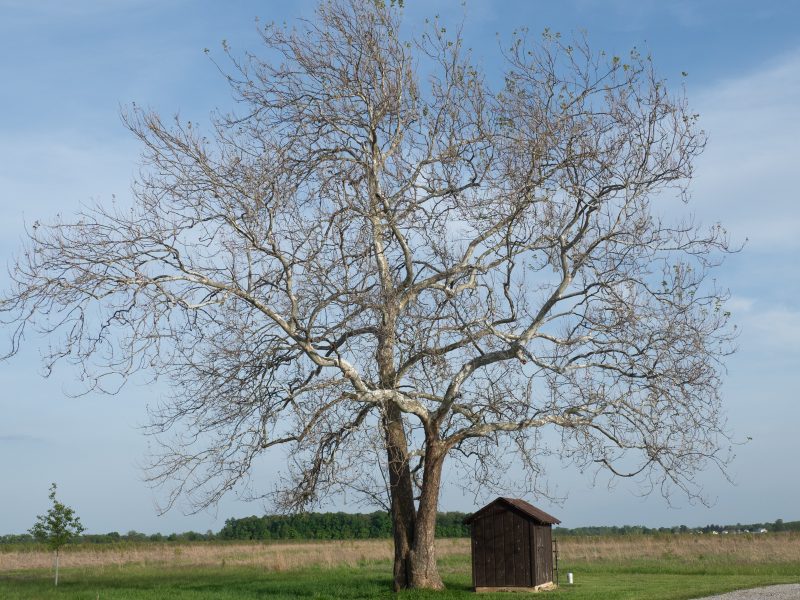 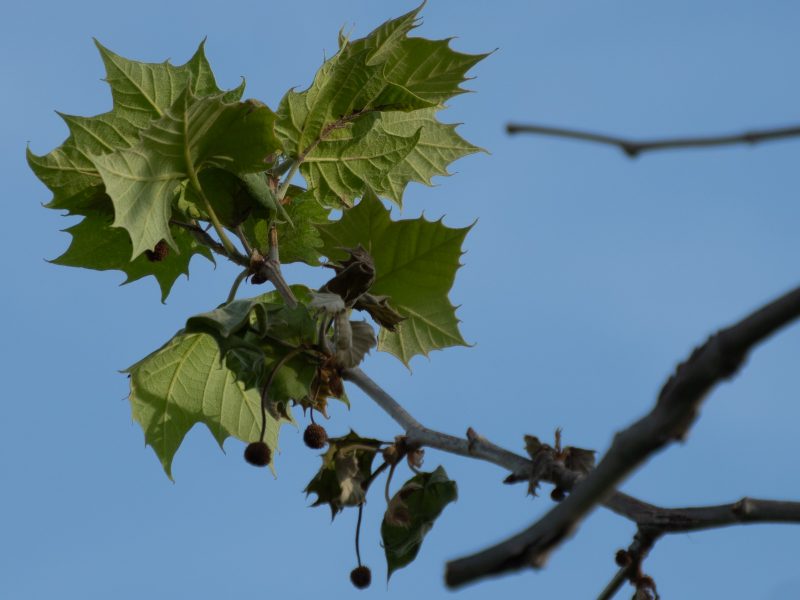 At the he restored wetland called “Watts Wetland,” eastern cottonwood thrives in the low-lying soil. 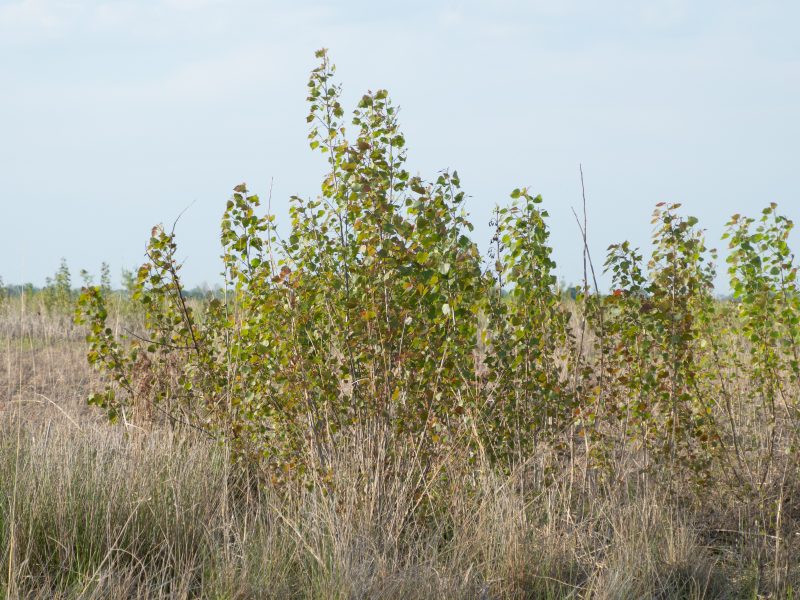 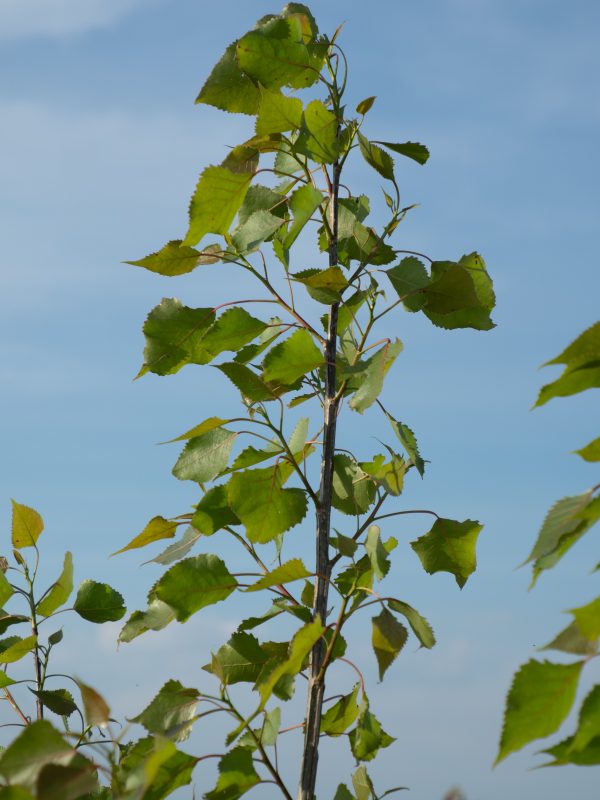 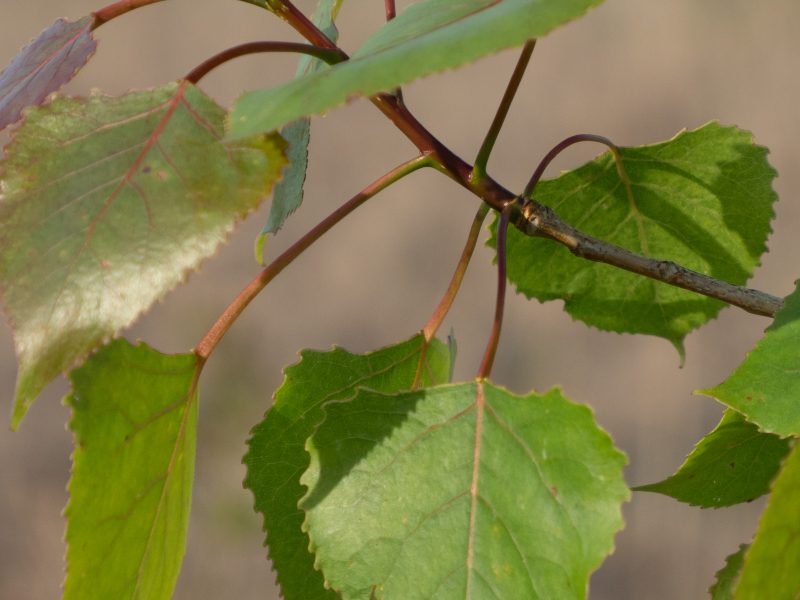 Ohio buckeye is a distinctive small tree, owing to its large, oppositely arranged palmately compound leaves. There are many of them growing at the Cedar Ridge Picnic Area portion of the park. 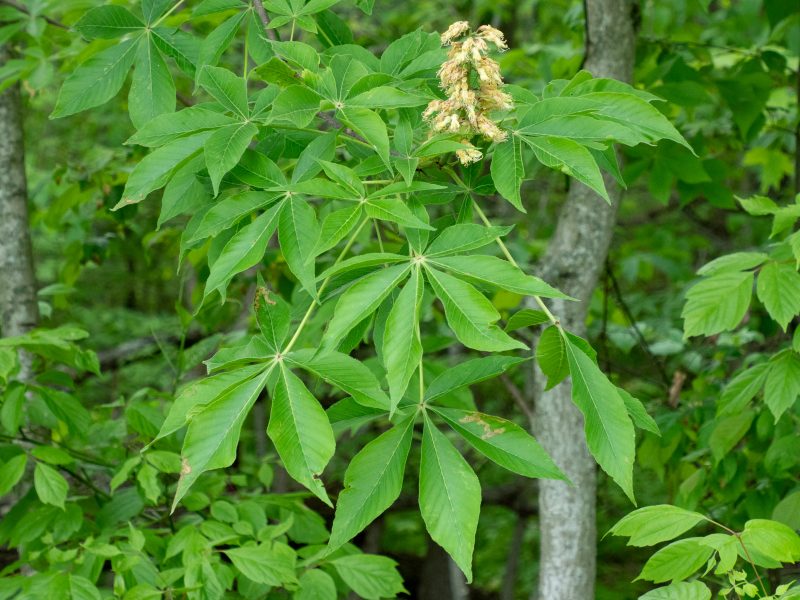 Buckeye has opposite palmately compound leaves.

As explained so well by Joe Boggs, writing for OSU Agricultural Extension HERE (link) an odd syndrome of drooping laves is caused by the presence of the larvae of a small native moth called the Buckeye Petiole Borer (Proteoteras aesculana). Eggs are laid on the leafstalk and a caterpillar bores into it, where it devours some of the contents, cutting off circulation to the leaf, which eventually dies and drops to the ground. 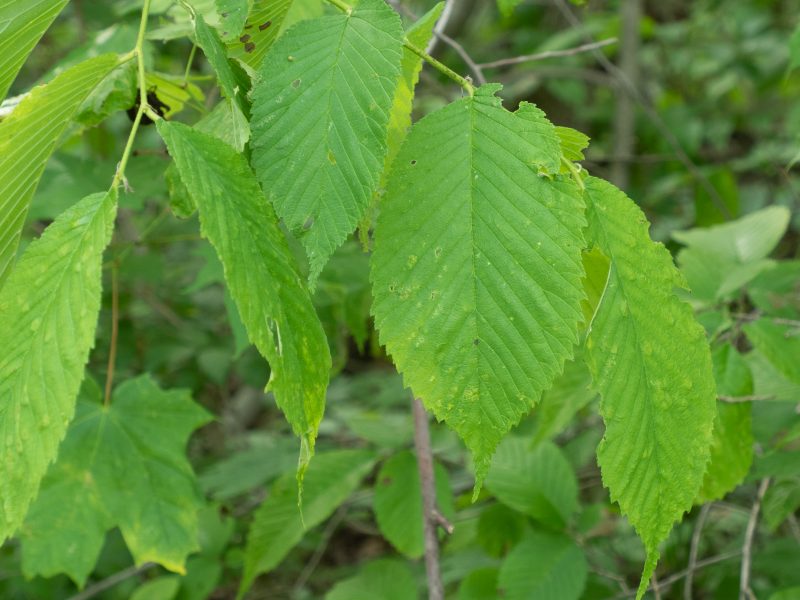 Elm leaves are doubly serrate –their teeth have teeth!

Whoa! While hunting for trees I spied a dead one –probably an ash –that had an ichneumon wasp, possible a “giant ichneumon wasp,” Megarhyssa atrata, which lays eggs in horntail larvae deep in the wood of dead trees.

Hackberry is a member of the elm family (Ulmaceae) and shares with elms the overall leaf appearance –simple, alternate, doubly-serrate, and with an unequal-sided leaf base. 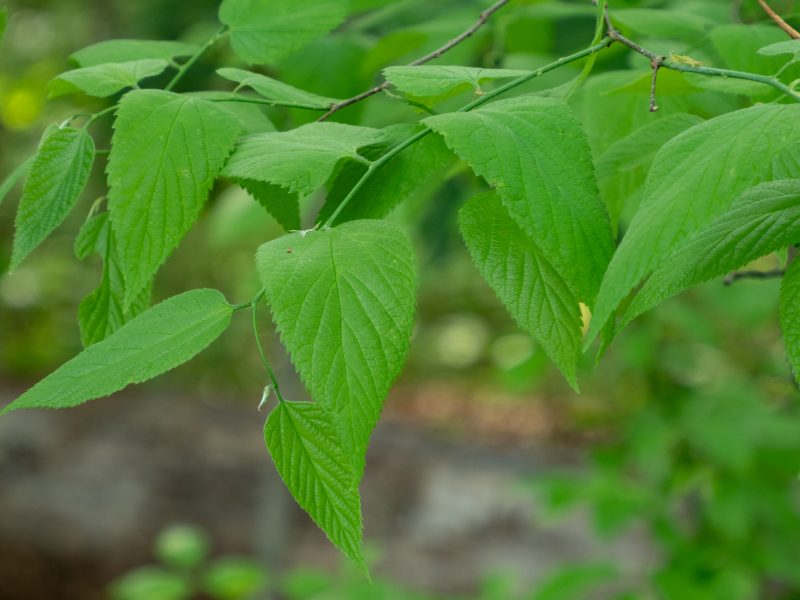 Just based on the leaves, hackberry is a pretty indistinctive tree. It looks vaguely elm-like. In fruit, it stands apart from elms by bearing little pea-sized drupes, very unlike the dry flat winged samaras of elms. Hackberry bark is more deeply furrowed than any other Ohio tree. Later in the season look for little pencil-eraser shaped projections on the bottoms of hackberry leaves that are galls caused by a psyllid (a type of true bug in the order hemiptera). According to the Texas A&M extension service, these litle bugs sometimes enter homes! 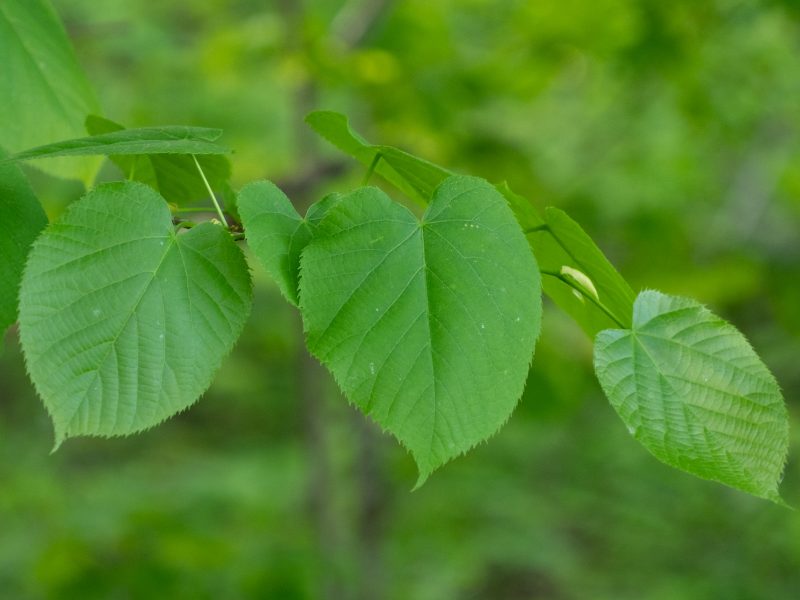 Basswood flowers, blooming in late June, are an important nectar source for honeybees in early summer when spring nectar sources are finishing up. They are produced in few-flowered axillary clusters at the end of stalks fused to a strap-shaped leaf-like bract, an apparent agent of wind dispersal of the fruits (dry pea-sized drupes).

George A. Petrides, in our “textbook” Peterson Field Guides Trees and Shrubs mentions that the inner bark of basswood, especially that of the roots, is tough and fibrous, suitable for twisting into mats, cords and lines.

This is what is simultaneously one of the world’s most annoying, and most wonderful, trees. Definitely not a good choice for dancing barefoot beneath, meet the sweetgum, Liquidambar styraciflua. I have one in front of my house, and since this is the tree that produces spiny balls that drop to the ground and roll onto neighboring lawns the neighbors don’t love me for having this tree, but the birds do. Goldfinches and chickadees treat the fruits (they’re actually multiples of capsules) lie little bird-feeders. Twice in late winters past there were white-winged cross-bills there! 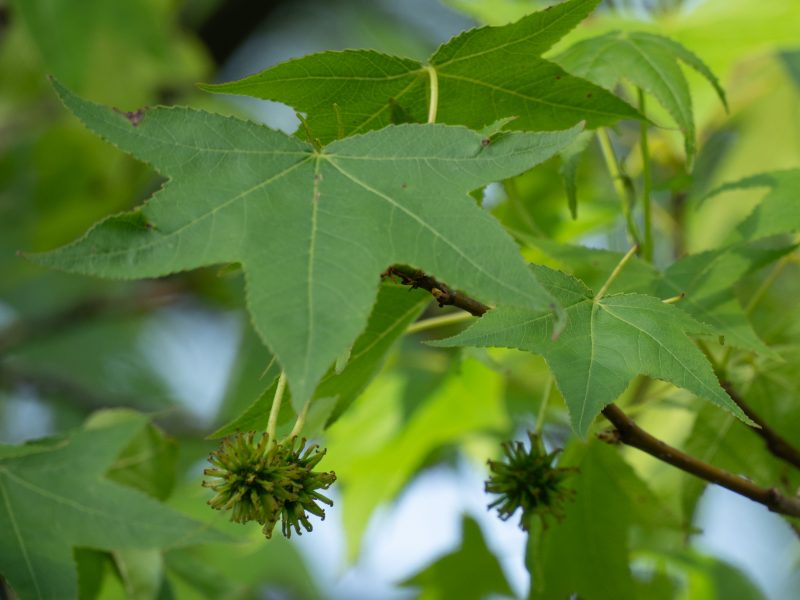 Annoying, but they are little finch feeders!

E. Lucy Braun, in The Woody Plants of Ohio (1961) explains that this is a southern tree that just barely makes it into Ohio, where it is a tree of swampy alluvial stream flats. The genus name is a combination of the Latin liquidus, liquid, and the Arabic ambar, in reference to a fragrant gum that exudes from cracks in the bark.

Ashes are (except for the weird boxelder maple, sometimes thus called “ash-leaved maple”) our only trees with opposite pinnately compound leaves. Blue ash, Fraxinus quadrangulata, is distinctive in two ways. its soil type, and its twigs. The species is a distinct calciphile, found in places with abundant limestone., It’s easily identified by the sharply 4-angled twigs. 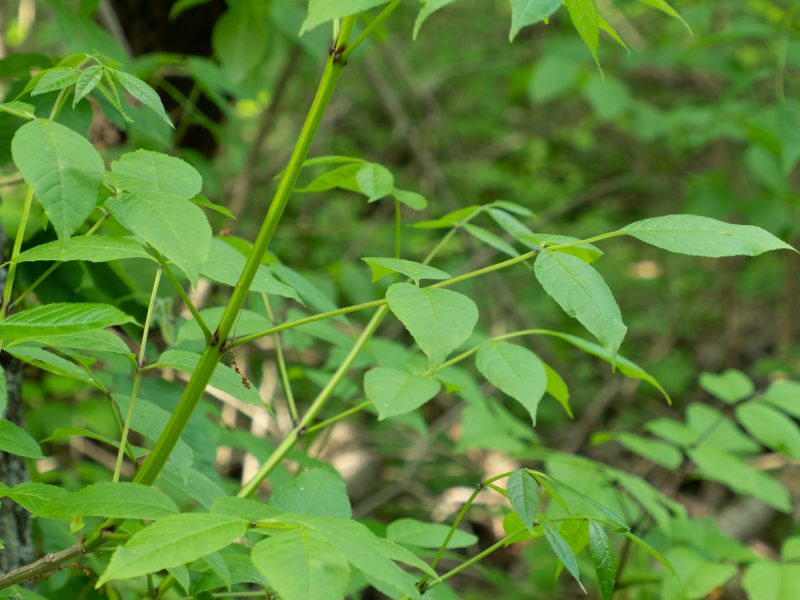 Blue has twigs are 4-angled,

Oh, and there’s something else special. The flowers, unlike all our other ashes, are “perfect,” i.e., not unisexual…bearing both stamens and a pistil. Here’s a photo I captured about a month ago showing the flowers. 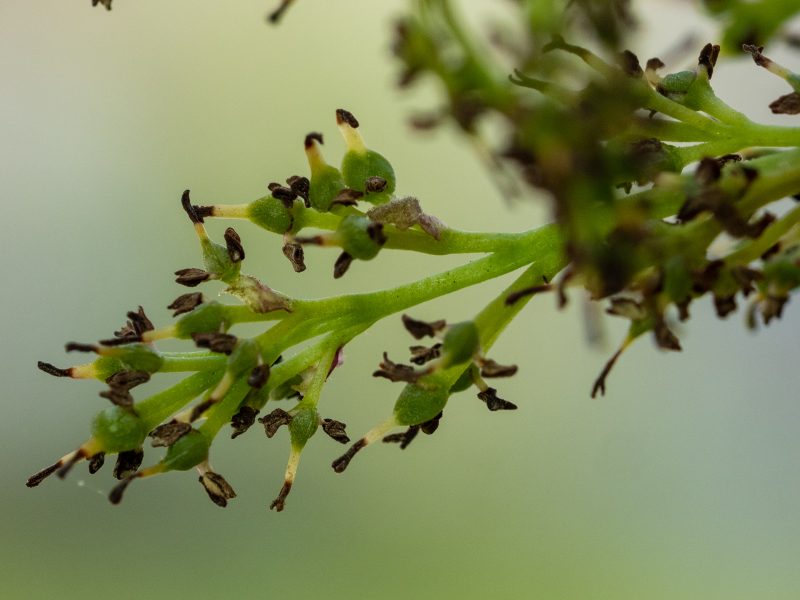