As explained on the “Prairie” menu item of the course companion web page (ohioplants.org), a “prairie” is a permanent grassland with few or no woody plants. Fire-dependent ecosystems, prairies differ from old fields and meadows in that the prairies are more or less stable and self-perpetuating, rather than being a short-lived step along the way to becoming woodland. The vegetation that occurs in prairie is mainly fire adapted and drought-tolerant grasses and sedges. They are are usually accompanied by other herbaceous plants, adapted to drought and also low nutrient levels.

The Ohio State-Marion Campus Prairie was established in the 1970’s by a visionary botanist faculty member, Larry R. Yoder, using seeds and plants from nearly natural prairie remnants, particularly the Claridon Railroad Prairie in Caledonia that is 7 km NE of the campus. The prairie is roughly 15 acres. It is used as a lab classroom for biology classes there, and is a popular place for the public to come and hike while studying nature. I worked at OSU-Marion for 20+ years, and was part of the team that administered this campus natural area. This summer I’m helping with a survey of Ohio bees, and this is one of study sites. Once a week I set out and retrieve, 24 hrs. later, little dishes of soapy water that bees are drawn to, and become captured.

The plants mentioned here are ones that were observed during twice-weekly visits to the site during August and September, 2020.

This is the Google Maps view of the area. Zoom out a little to see the campus and surrounding farmland.

Here are some other views of the prairie, taken in the spring with my drone (showoff!). First the north, older, half of the prairie. This area is becoming overgrown with shrubs, and so could use some management work. 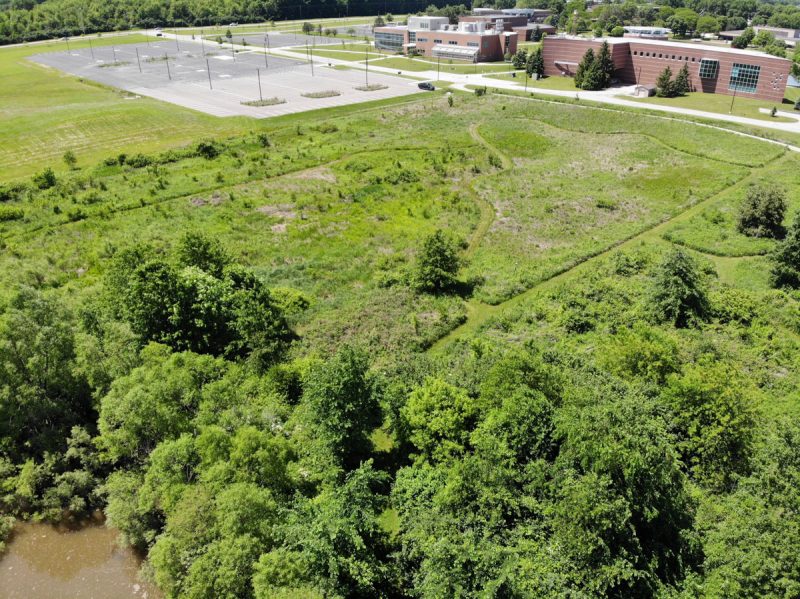 northern half of the prairie

Expansion is taking place to the south. 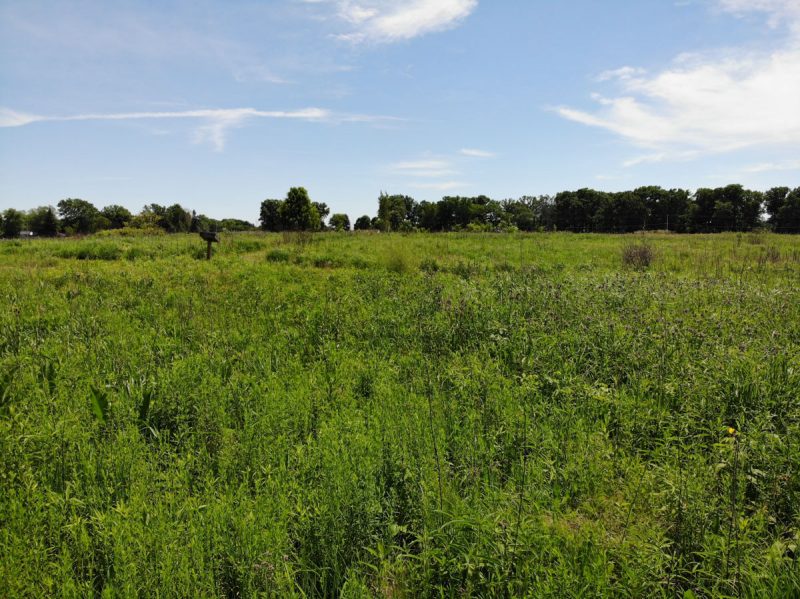 southern half of prairie

There’s a picnic area shelter house donated by the late Trella Romine, a local naturalist and amateur historian. It is used for teaching. 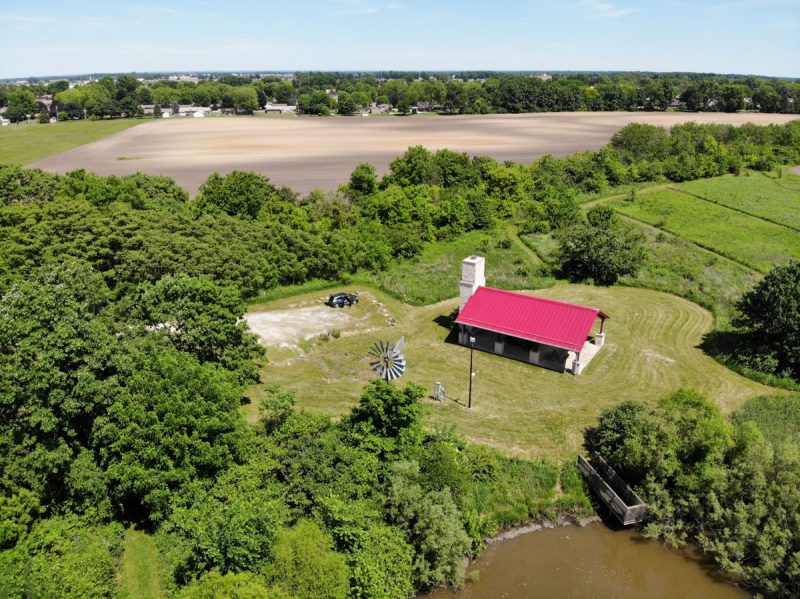 Her’e is what the prairie looks like today, after some aggressive shrub -killing. A prairie is supposed to be a mostly grassy area with no, or very few, woody plants. Shrubs are taking over! So I and a fellow prairie enthusiast are methodically cutting all the woody plants (except for a few oak trees) and painting the stumps with herbicide. Here;s a pile of shrubs stems awaiting removal (or a fire). 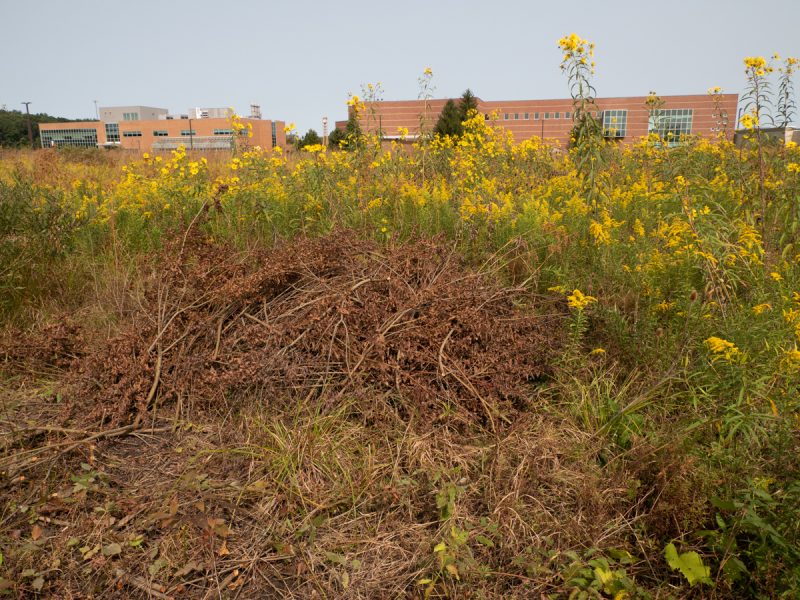 There aren’t a whole lot of trees besides the 8 discussed earlier on the “Trees” page, but after a little searching I found two. Boxelder maple (Acer negundo) is a small tree of distubed open wooded areas. It is unique among our maples in having pinnately compound, not simple, leaves. 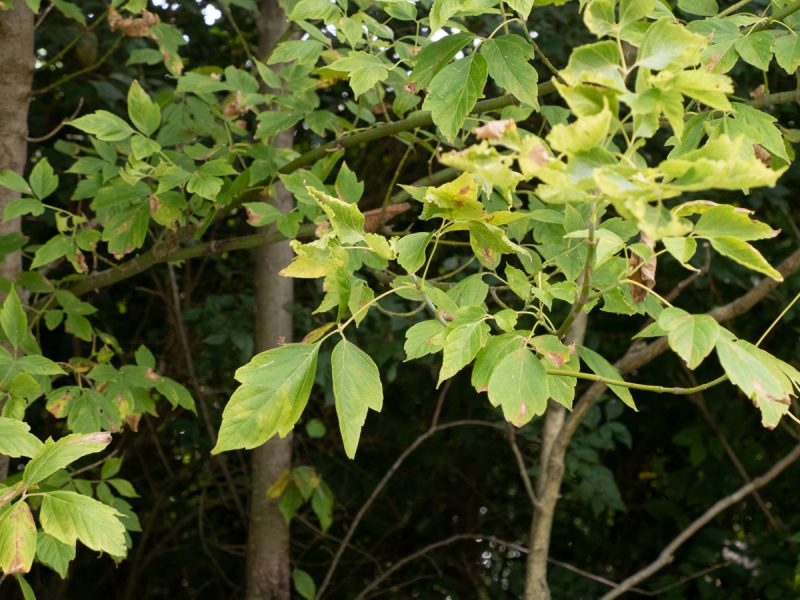 Shingle oak (Quercus imbricaria) is another tree that stands apart from its congenors. All other Ohio oaks have lobed leaves; this one has entire-margined ones that look oddly cherry-like. 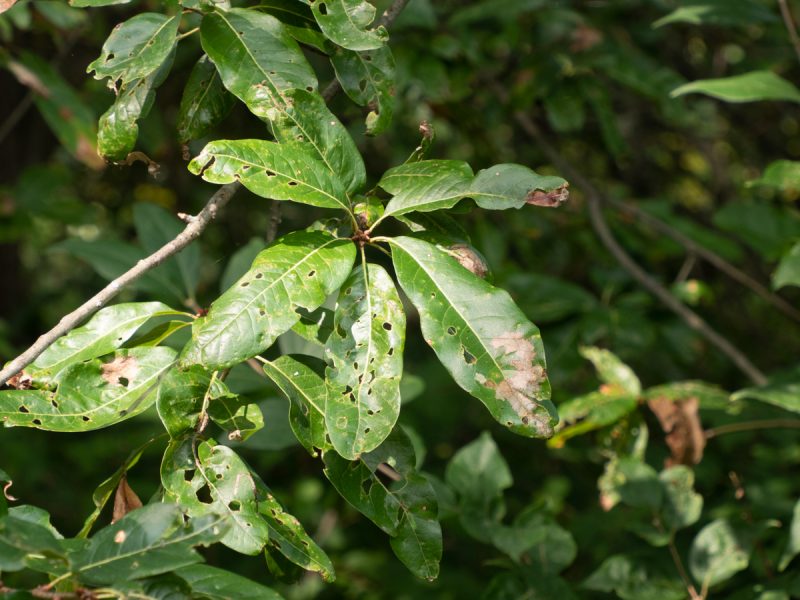 Oaks are known for having a great many galls –anomalous growths caused by other organisms, most typically small wasps. One such gall, the gouty oak gall is visible on this tree. According to the University of Illinois Extension Service (LINK) the the tiny wasp that causes this is Callirhytis quercuspunctata, which attack several members of the red oak group. They say that heavy infestations can damage trees. They have been used to make ink. 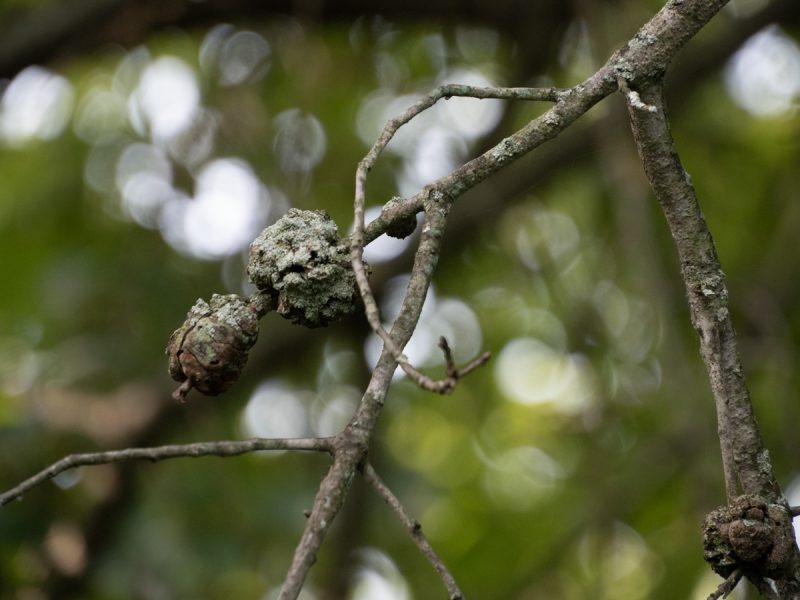 Elderberry (Sambucus canadensis) is a shrub that, like boxelder maple, could be confusing, as it has opposite pinnately compound leaves, which is the hallmark of ashes. Note the inflorescence and fruits types, however: elderberry produces berries displayed on a much-branched cyme.

Petrides, in Peterson’s Field Guide to Trees and Shrubs tells us that all parts of the plant are reported to contain hydrocyanic acid,but that, “regardless, fruits are used in making jams, jelly, wine, pies” 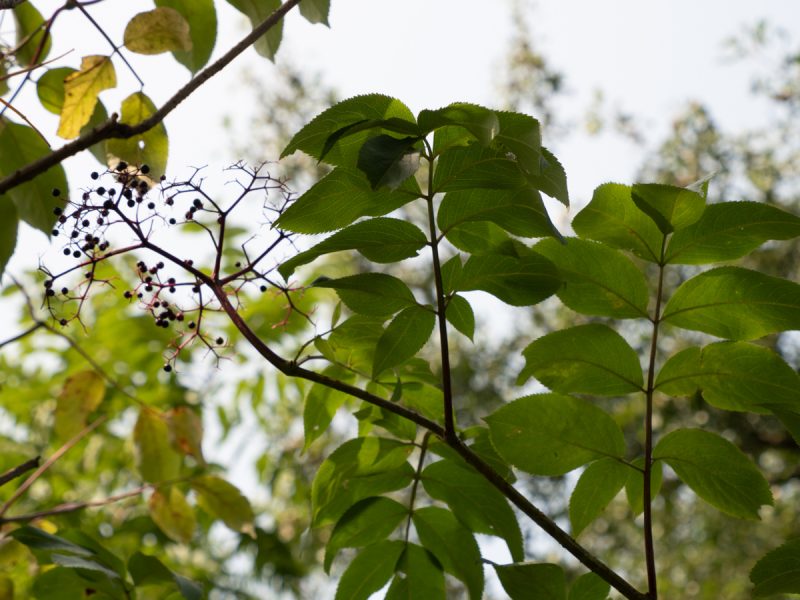 Willows (genus Salix)are taxonomically difficults, as they frequently hybridize. This one seemed to key out fairly smoothly to “upland willow,” Salix humilis. 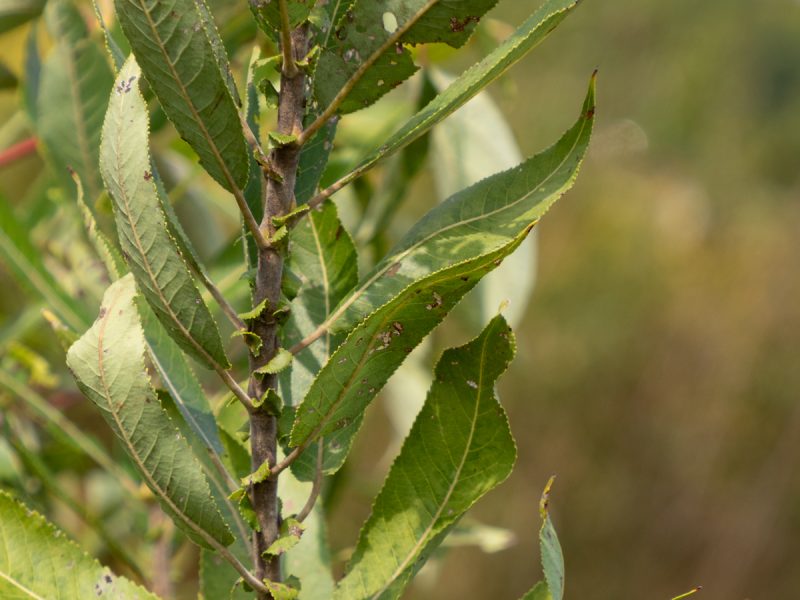 Upland willow is a multi-branched shrub.

There are a number of flowers blooming at the prairie. In typical late summer fashion, most are “composites,” i.e., members of the Asteraceae. I sought out non-Asteraceae because they have more distinctive flowers. One of them is closed (or bottle) gentian, Gentiana andrewsii. 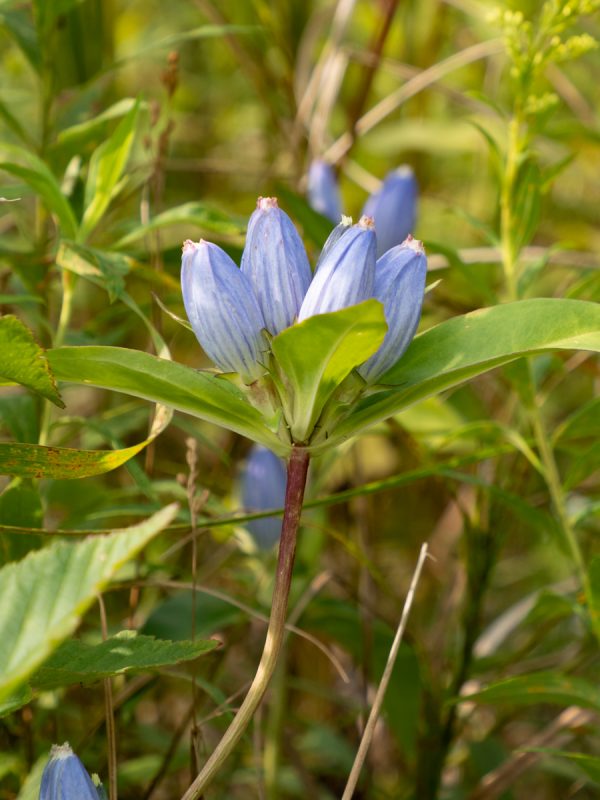 Bottle gentian has an opening at the top that bees enter.

Irresistible though, this member of the Asteraceae is acherished prairie wildflower. It’s scaly blazing-star, Liatris scariosa. It’s an example of a composite with a discoid capitulum, i.e., having only one type of flower, the radially symmetric dick ones, the lie 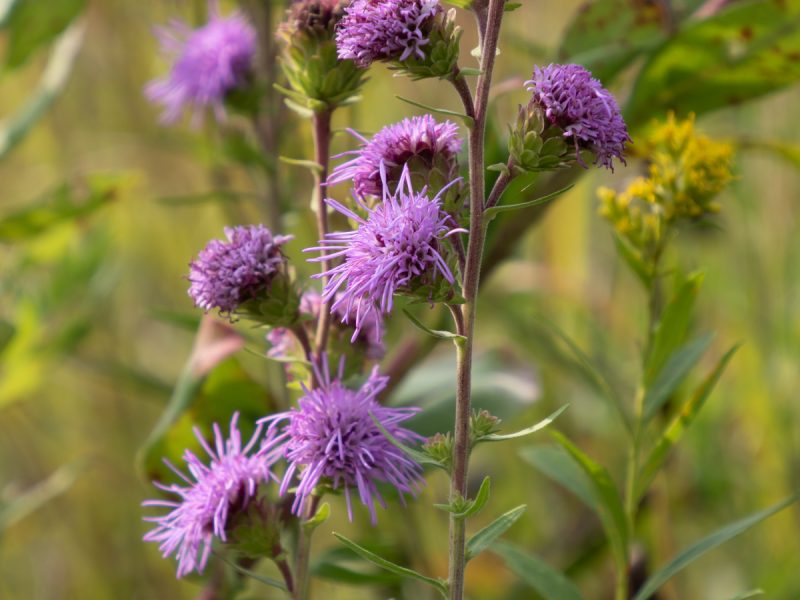 Poison-ivy is way too abundant, forming a carpet between scattered shrubs. The vine habit and trifoliolate leaves are distinctive. 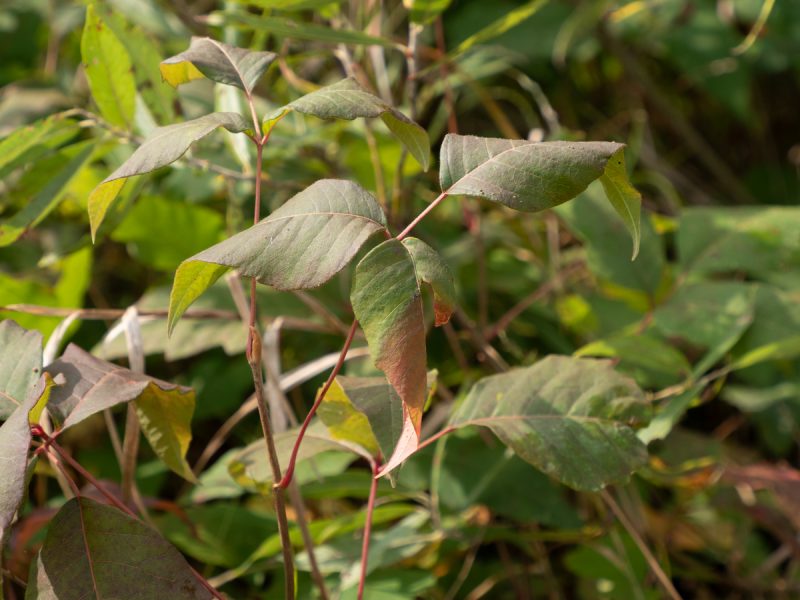 Leaflet three, let it be!