THE PLACE I LOST MY TRIPOD
(Graessle Road Bluff, Darbydale)
(scroll to end for High and Low CC plants)

In mid-May an ecologist friend mentioned a steep eroding hillside with a sparsely wooded bluff in the vicinity of Battelle Darby Creek Metro Park that he said had some interesting plants growing on it. It is sometimes called the Graessle Road Bluff. The directions were a bit tricky (Siri had never heard of “Darbydale” even though it’s in Darbydale), but the view was worth it. A steeply eroding bluff! 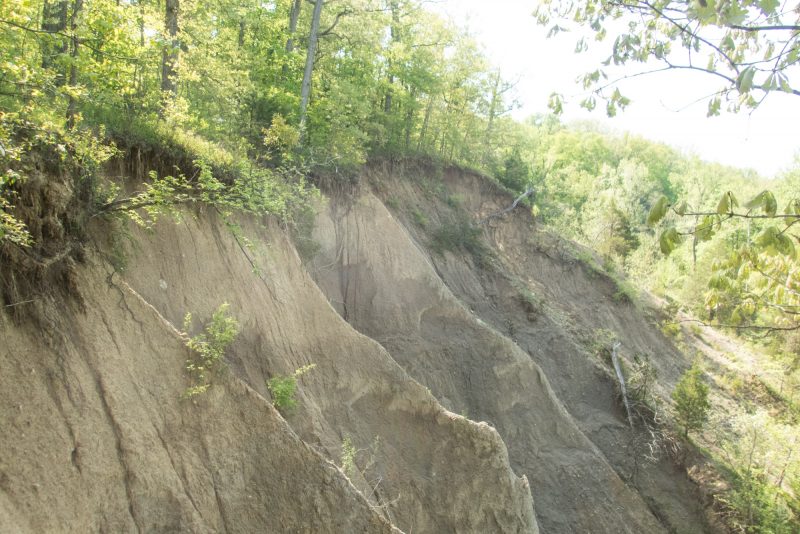 Since then I’ve visited the place several time, partly because it has interesting landscape and vegetation, and partly because I lost my tripod there and keep hoping that if I retrace my steps I could find it.

I park on London Groveport Road and walk northwest until about where the road bends due west, and then head up to the bluff through a second-growth (or third, or  fourth, or …)-growth woodland dominated by sugar maple (Acer saccharum), passing some wildflowers in the way. 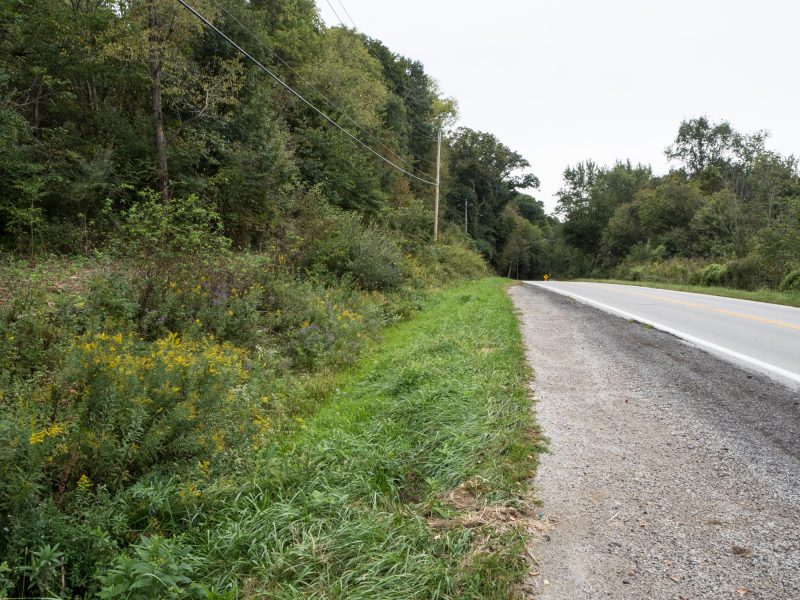 Roadside habitat is occupied by a variety of “weeds.”

The roadside is occupied by an interesting variety of weeds. On of them is a member of the aster family that flowers in very early spring before the leaves emerge. Its common name, however, is somewhat whimsically derived from the appearance of its leaves. This is “coltsfoot” (Tussilago farfara) –see how they look like horses’ hooves? 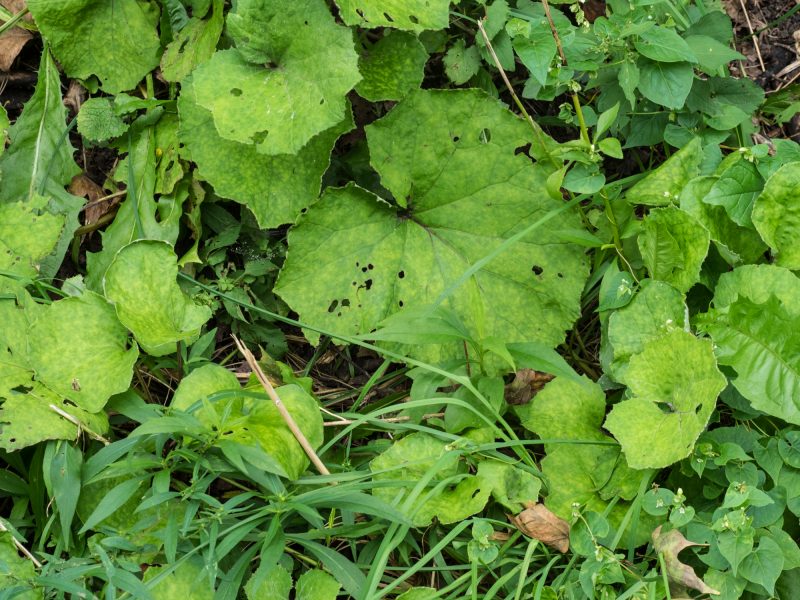 Coltfoot is named for its leaves.

The bluff is thin soil, and apparently subject to drying. Vegetation is thin, and includes some interesting prairie glade species. One of them is a member of the pea family, Fabaceae, its presence here aided perhaps by the ability of most plants in this family to fix atmospheric nitrogen. 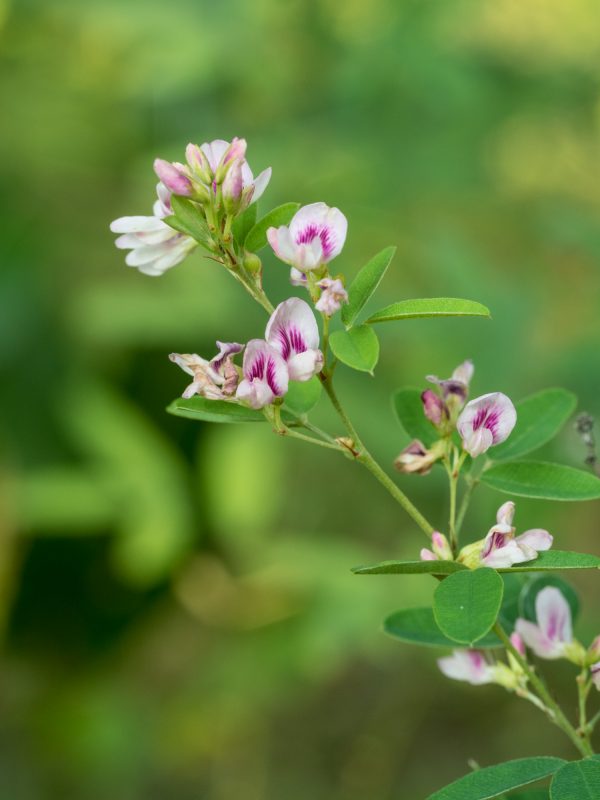 Wand lespedeza is a nitrogen-fixing member of the fabulous Fabaceae.

Some shrubs are common in the understory of the woodsd alongside the bluff. One of them is none too welcome as it’s a terribly invasive plant …that HURTS! This is multiflora rose, Rosa multiflora. The feathery stiuples are just barely discernible in the background in the photo below. 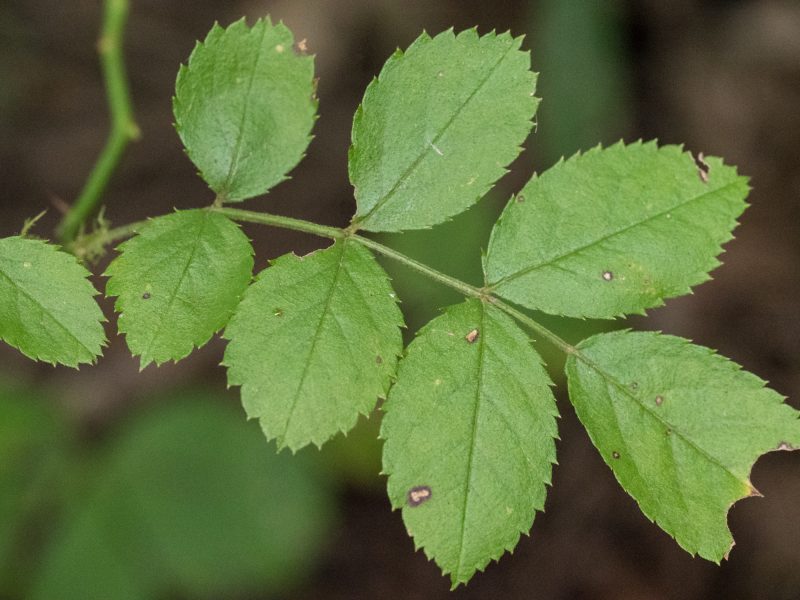 Multiflora rose: bad for the ecology of the forest.

The longer version of the memory clue for plants with opposite leaves is MADCAP HORSE. This stands for (M) Maple, (A) Ash, (D) Dogwood, (C) the plant family Caprifoliaceae, and; (H) Horsechestnut, by which mean buckeye, which is in the horsechestnut family Hippocastanaceae.

The Caprifoliaceae, or honeysuckle/viburnum family, is a family of mostly shrubs (a few are herbaceous) with opposite leaves. In contrast to honeysuckles (genus Lonicera), which have entire leaves and large flowers paired in the leaf axils, viburnums have serrate leaves and small flowers borne in flat-topped compound cymes. Our most common viburnum is black haw, Viburnum prunifolium. The fruits are berry-like drupes that, according to the Missouri Botanical Garden (LINK) often persist into winter and are quite attractive to birds and wildlife. 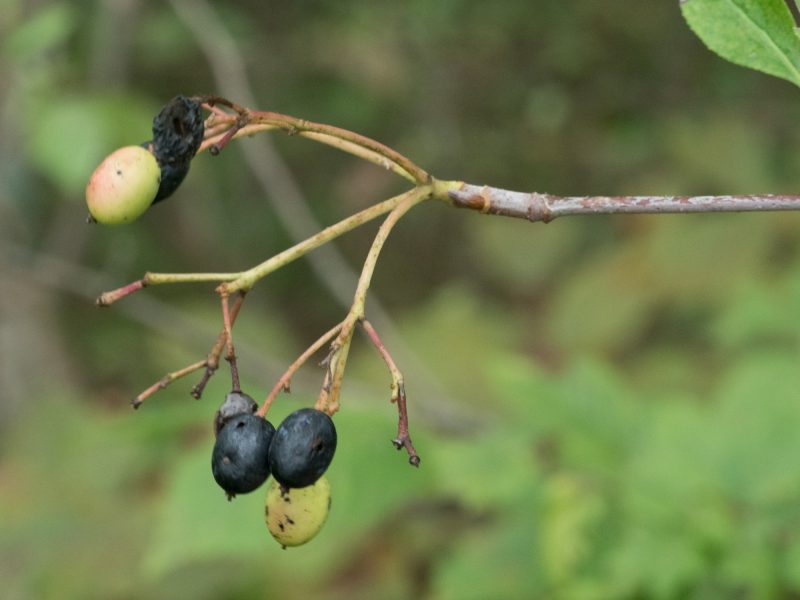 I photographed this species, indeed perhaps the same individual, back in May. Here’s what it looked like then. 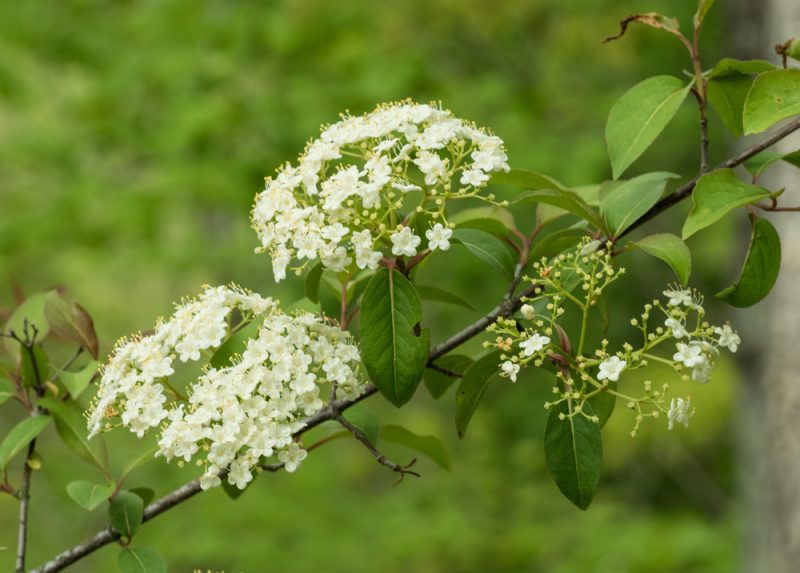 Black haw, Viburnum prunifolium, is a typical member of the Caprifoliaceae.

This is decidedly a calcareous site, and the vegetation attests to that, with several of the plants of limestone areas denoted in the Jane Forsyth article “Geobotany” that we read. Behold, it’s chinquapin oak, Quercus muhlenbergii. 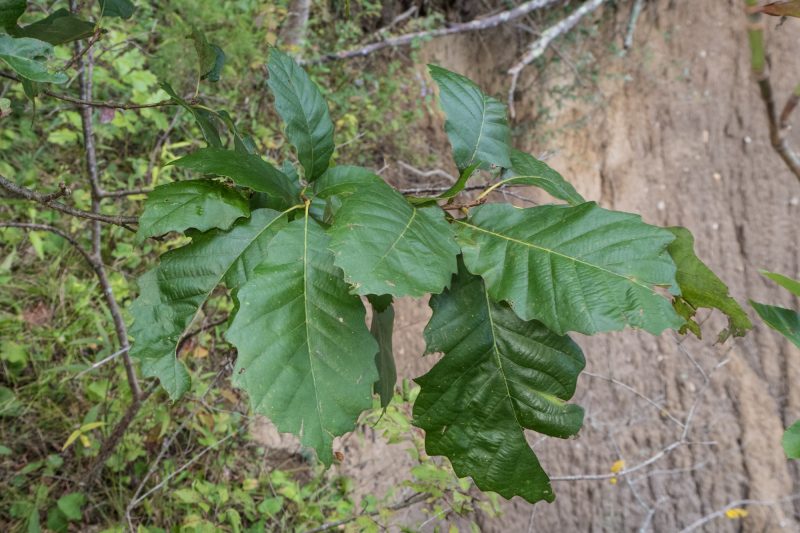 Chinquapin oak is a lime-loving member of the white oak group.

In case you were wondering what heck is a chinquapin, there’s an answer on the MOBOT site (LINK). They tell us “Leaves somewhat resemble the leaves of chestnut (Castanea) whose nut is sometimes called a chinquapin, hence the common name of this oak whose acorn is sweet and edible.” I’m now eager to try and eat these acorns!

Musclewood Carpinus carolineana, is a small understory tree in the birch family, Betulaceae. It is rendered distinctive by its bark (not shown), which is smooth and sinewy resembling an especially buff arm or leg. Also called “ironwood,” it has extremely hard wood that, according to the North Carolina Extension Service (LINK) will, as the common name suggests, take a horn-like polish. It was once used by early Americans to make bowls, tool handles and ox yokes. The trees aren’t very large or very abundant in a given area, so commercial production of hernbeam is not feasible. 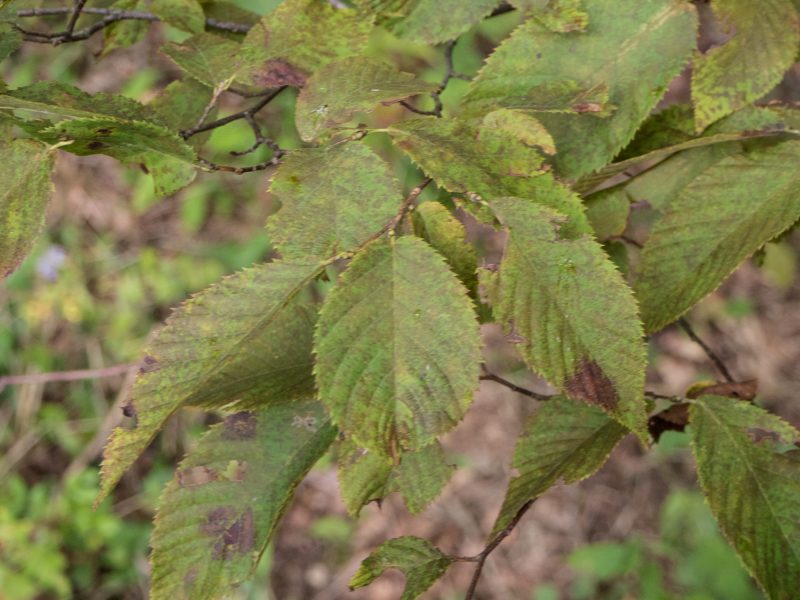 Carpinus carolineana, American hornbeam, is a hard-wooded small tree in the birch family.

There are some interesting mosses and lichens on the bluff. One of them is “medusa moss,” Hedwigia ciliata. This moss is an oddly shaped acrocarp (cushion moss) that lies flatter than most and also is a bit branched, so it apes being a pleurocarp (carpet moss). It is highly specific to the tops of siliceous boulders in woodlands. This is the substrate the moss is on. 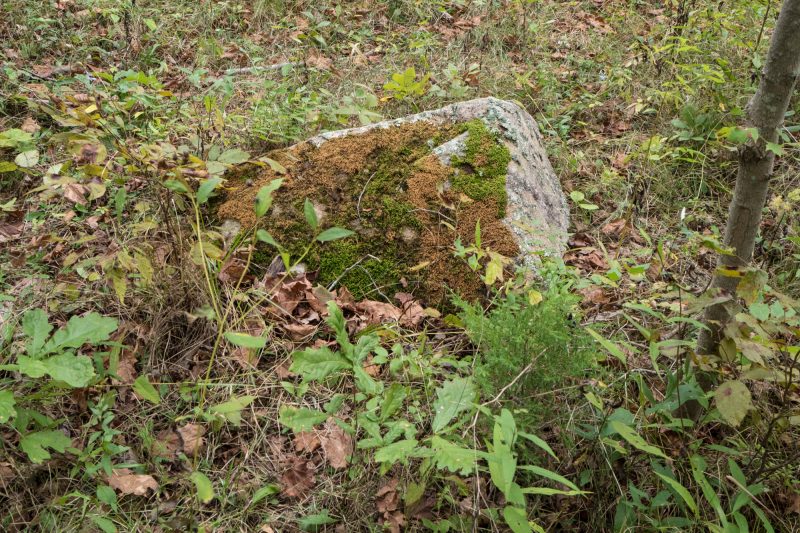 Ths moss has triangular-ovate leaves that lack a costa (mid-nerve). The leaf tips are pale, ;acking chlorophyll, and gibing the moss a distinctive hoary aspect when dry. The photo below is of a wet patch of Hedwigia. 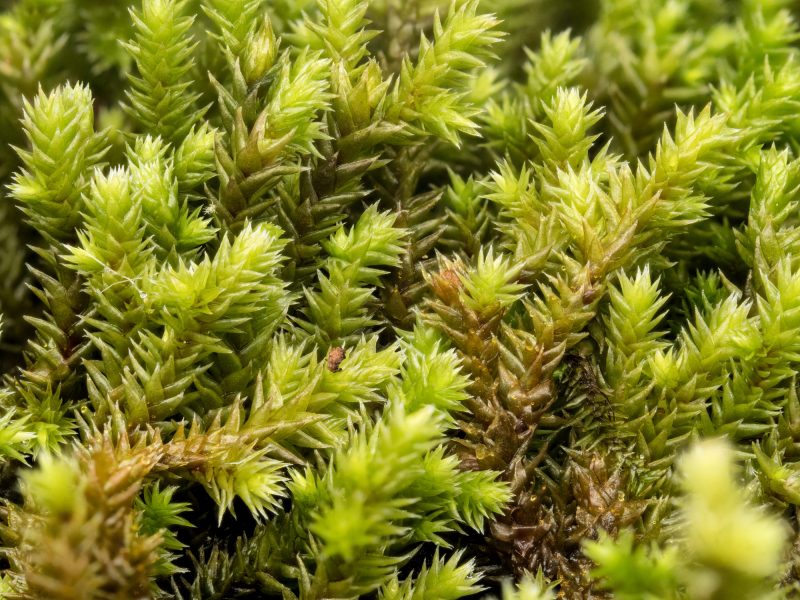 A plants to avoid is posion-ivy (Toxicodendron radicans), a member of the cashew family, Anacardiaceae. All parts of the plant contain an allergenic (to many people) principal, urushiol. This ia a non-volative oil, which means that you need to actually touch the plant (or touch something that has been in contact with it) to contract the dermatitis.

To recognize this dastardly plant, look for a vine with alternate trifoliolate leaves and, in the fall and winter, whitish berry-like drupes. Here’s a photo taken in late September a few years ago. 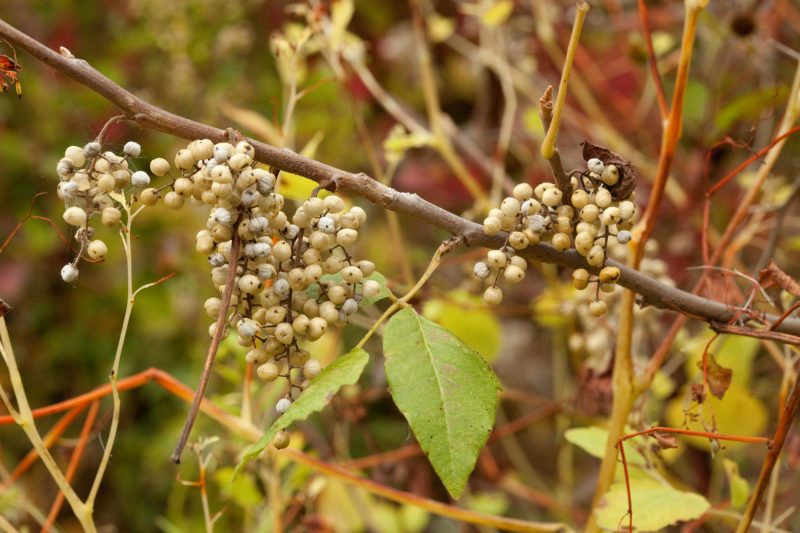 Leaflet three, let it be!
Drupes of white, run in fright!

The Coefficient of Conservatism, CC, with values ranging from 0 to 10, is an estimate of the degree to which a species is associated with high-quality natural communities similar to those which existed in pre-settlement times. Exotic (alien, introduced) species are not assigned CC values.

CC values for all of Ohio’s plants can be found in the Ohio Environmental Protection Agency’s web site.

I saw several species with CC values greater than 5. The highest-scoring plants was rough blazing-star, Liatris squarosa, a member of the Asteraceae. 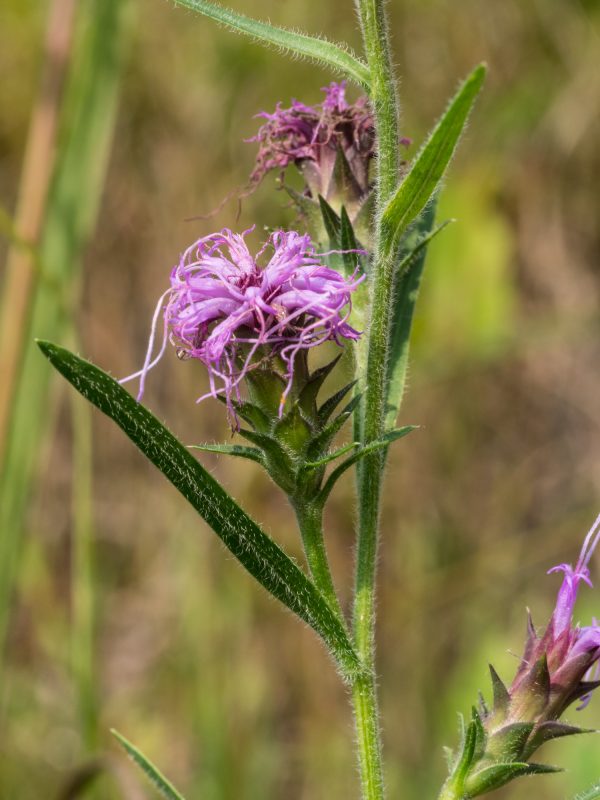 A few of the woody plants are high-scoring. Even though they are not rare, they are not found outside of rich woods, the principal vegetation type in pre-settlement times. The tree American basswood, Tilia americana, has an affinity for limestone soils. 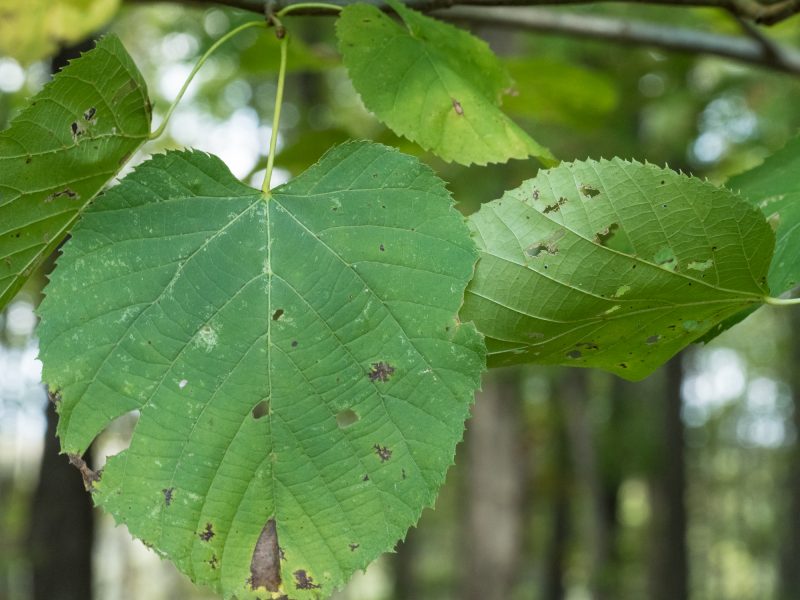 Witch-hazel, Hamemelis virginiana, is a shrub famous for flowering very late in the season –late October or even early November! 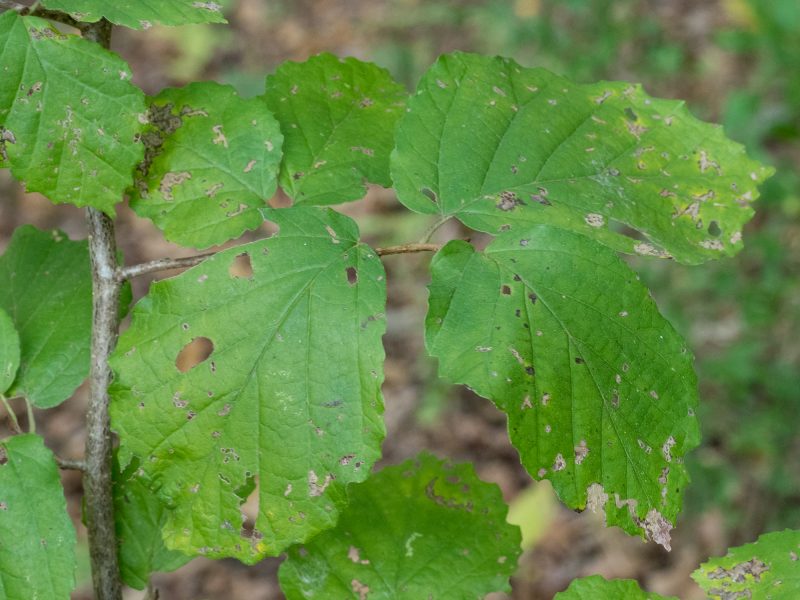 Whorled rosin-weed, Silphium trifoliatun, is a prairie or glade member of the Asteraceae. Note the radiate capitulum, with the ray flowers fertile and the disk flower staminate. 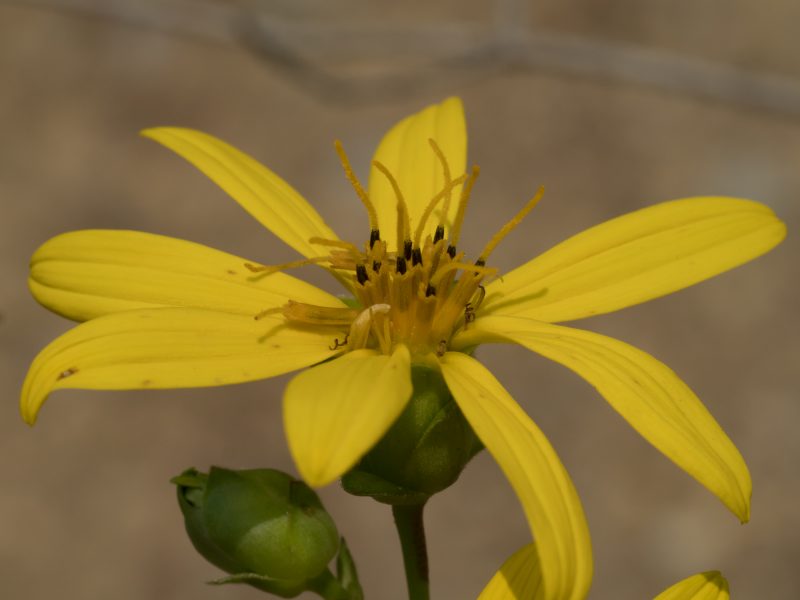 Some of the lower-CC plants are native wildflowers that can be found in disturbed setting. Pale jewel-weed, Impatiens pallida, is an annual of open woods that often appears along shaded rural roadside and paths. 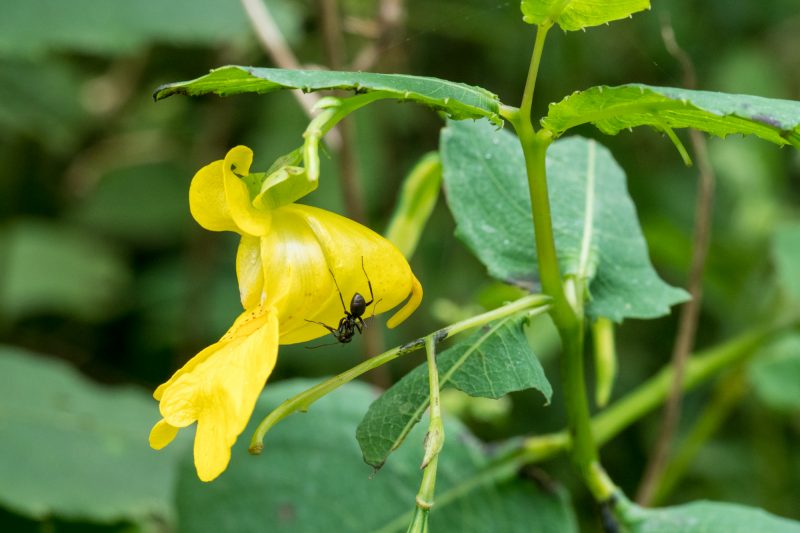 A vine with inconspicuous flowers that climbs over plants at the edges of woodlands, Fallopia scandens is a member of the buckwheat family, Polygonaceae. 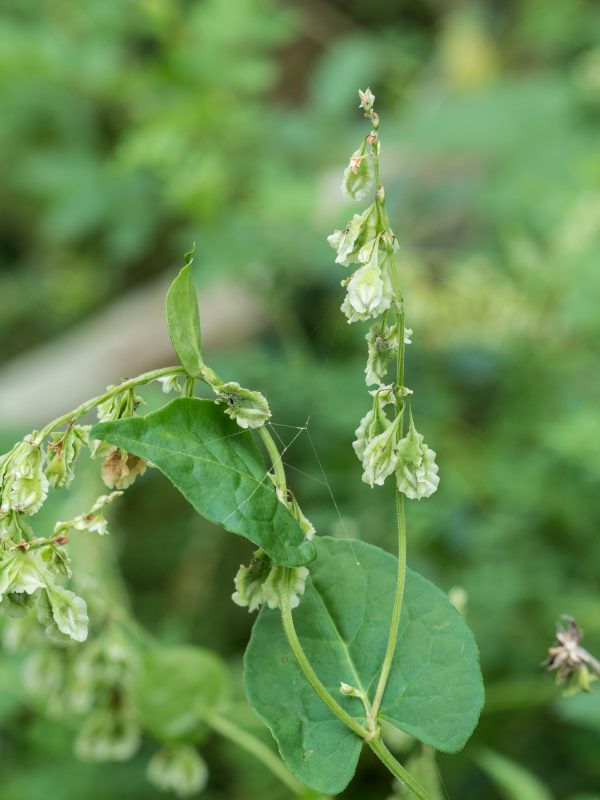 Not all orchids are restricted to high=quality natural ecosystems. Nodding ladies-tresses, Spiranthes cernua can be found on somewhat disturbed sites. 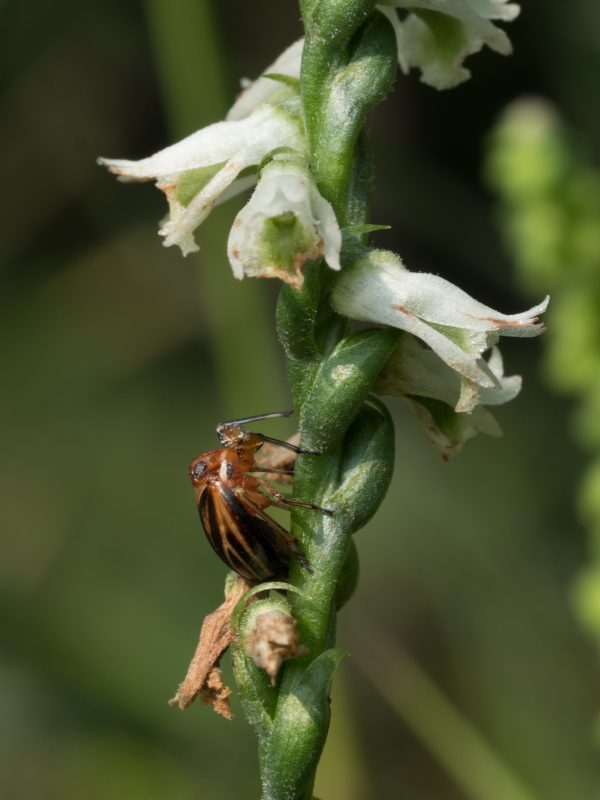 One of the prettier and easily recognized goldenrods, gray goldenrod, Solidago nemoralis, is also called “old field goldenrod,” and has a correspondingly low CC of 2. 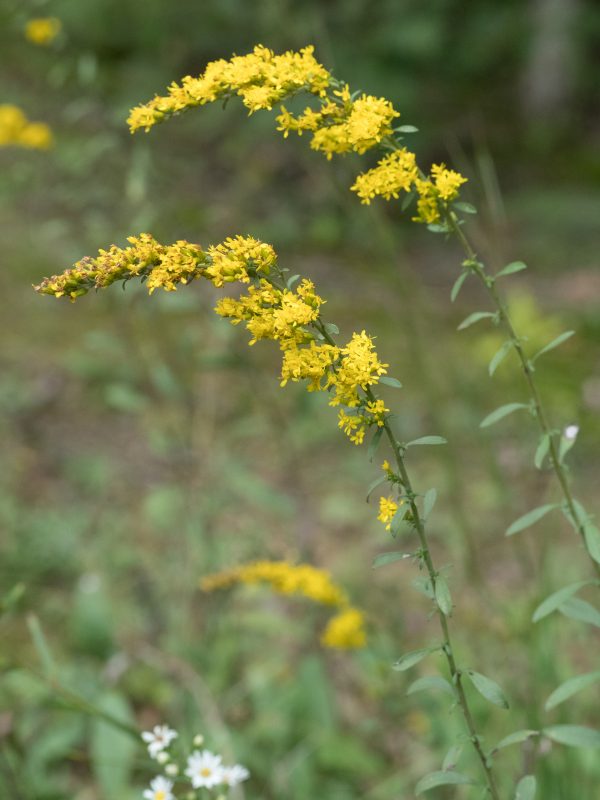 This is a good site for bryophytes and lichens. Most mosses don’t have common names, but it they did, then Leucodon julaceus would be “coathanger moss.” It’s a pleurocarp (carpet moss) that grows on the vertical surface of tree bark, and has curved-ascending branches. This was seen at the base of a white oak. 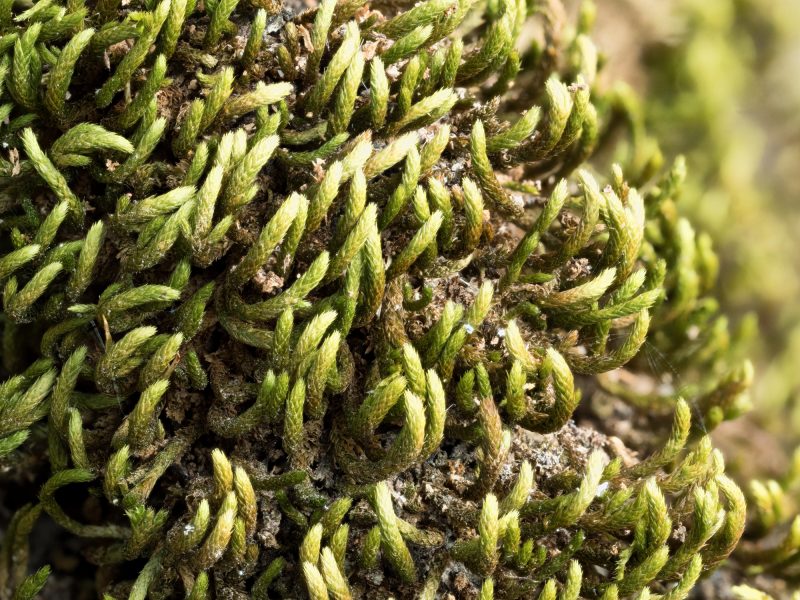 Leucodon julaceus is a carpet moss that grows on trees.

Photobombing Atrichum! What looks here like a lush carpet moss with sporophytes is actually two species mingled together. This is Bryoandersonia illecebra gametophytes covering a few “fruiting” (sporophyte-producing) stems of Atrichum angustatum that are popping through. 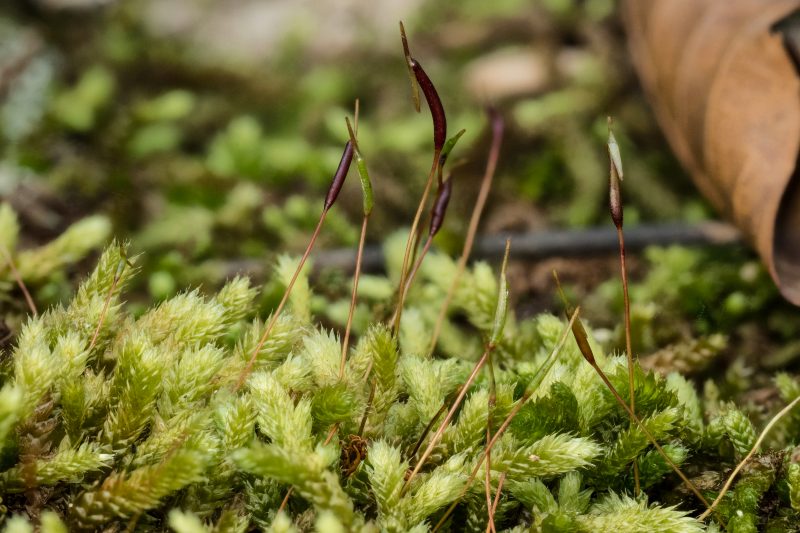 An unusual type of symbiosis is fould in the pelt lichens such as this dog lichen, Peltigera canina. “Pelt lichens” in the genus Peltigera are large flat foliose lichens found most often on the ground. Although it isn’t obvious unless you were to do a cross-section and examine it under magnification, the photobiont in these lichens is a blue-green bacterium rather then a green alga (the more typical lichen photobiont). 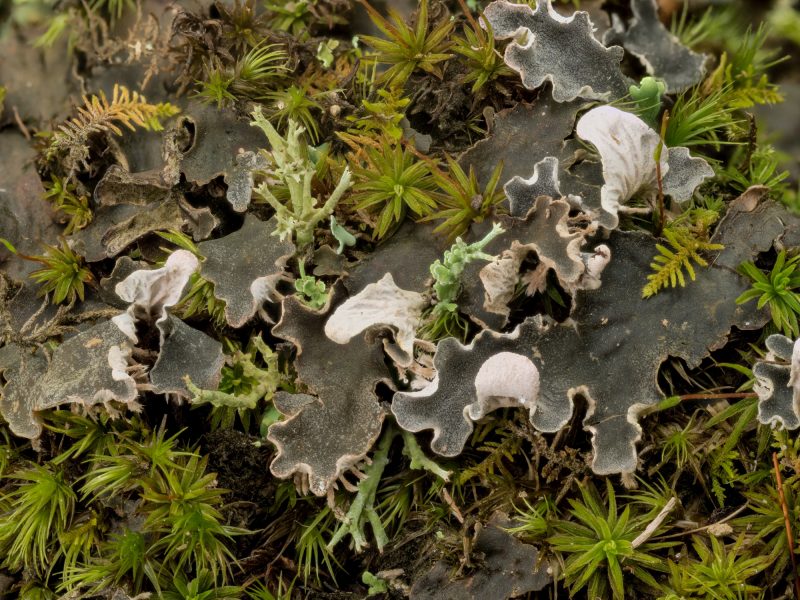 Peltigera canina is “dog lichen,” a huge foliose lichen with a cyanobacterial photobiont.

Near the dog lichen is a cup-forming cladonia, probably Cladonia pyxidata. 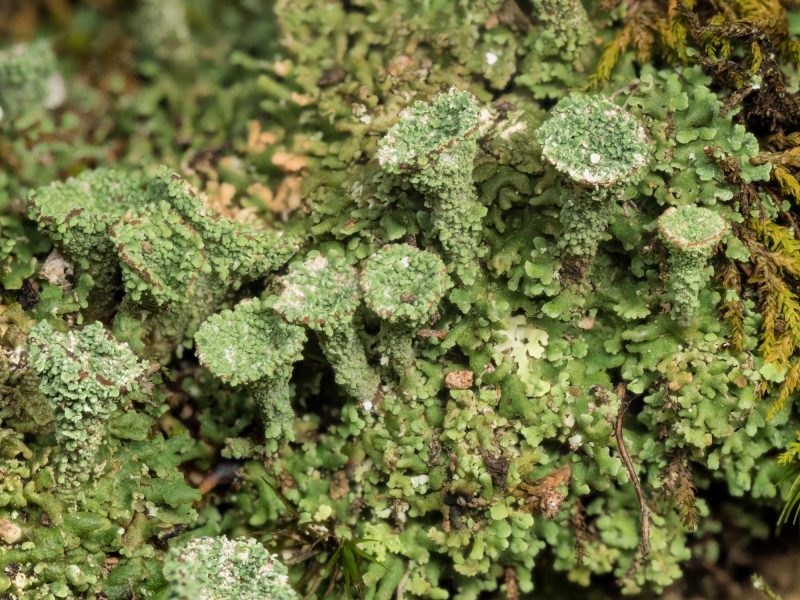