Ack!! Merrily chilling at home after a busy day in the classroom and lab, when suddenly I remembered the trees assignment is due tonight! Fortunately there was a little daylight left so I started out on a drive to some as-yet undetermined tree-ey place when, when I noticed there are TREES in my neighborhood, so I didn’t have to go anywhere to snag 8 of them.

Right in front of my house is what is simultaneously one of the world’s most annoying, and most wonderful, trees. Definitely not a good choice for dancing barefoot beneath, meet the sweetgum, Liquidambar styraciflua. 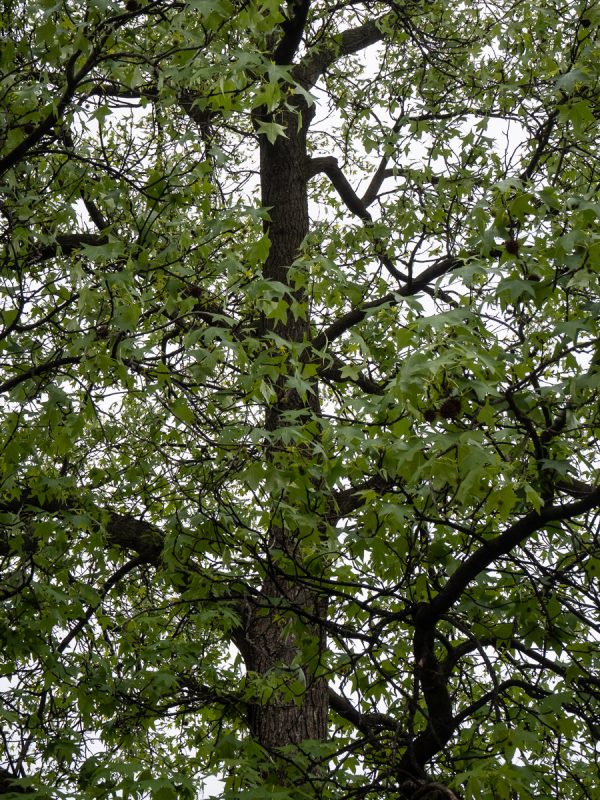 A large sweetgum tree that annoys my neighbors.

This is the tree that produces spiny balls that drop to the ground and roll onto neighboring lawns. The neighbors don;t love me for having this tree, but the birds do. Goldfinches and chickadees treat the fruits (they’re actually multiples of capsules) lie little bird-feeders. Twice in late winters past there were white-winged cross-bills here!!!! 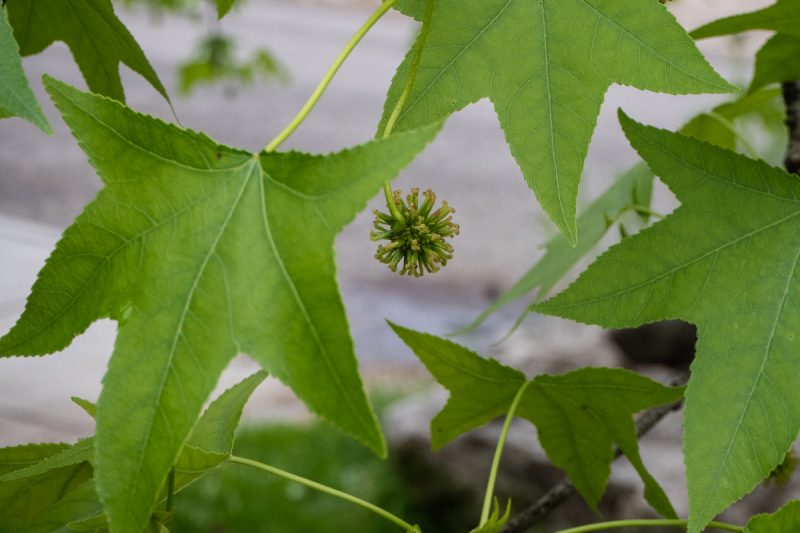 Very young sweetgum fruits.
This will mature into a multiple of capsules.

E. Lucy Braun, in The Woody Plants of Ohio (1961) explains that this is a southern tree that just barely makes it into Ohio, where it is a tree of swampy alluvial stream flats. The genus name is a combination of the Latin liquidus, liquid, and the Arabic ambar, in reference to a fragrant gum that exudes from cracks in the bark.

Across the street is another forest giant that the City of Columbus probably wishes weren’t so prevalent here. It’s an American sycamore, Platanus occidentalis (or possibly the very similar London plane tree, a hybrid of that species and a Asian relative). 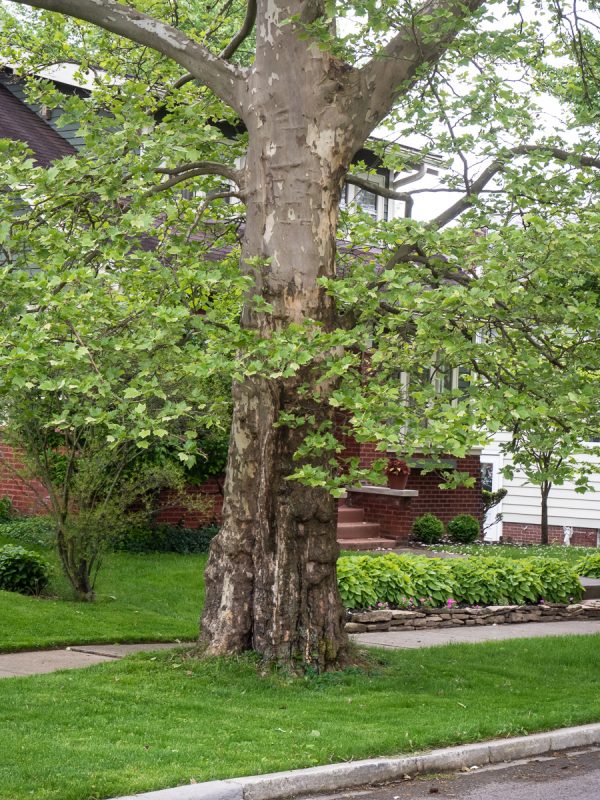 These trees can get to be huuuuge, not so much in height but in girth. Strausbaugh and Core, in Flora of West Virginia mention that not one but TWO people, John and Samuel Pringle, lived in a hollow sycamore tree near the present site of Buckhannon (in central West Virginia) from 1764 to 1768! 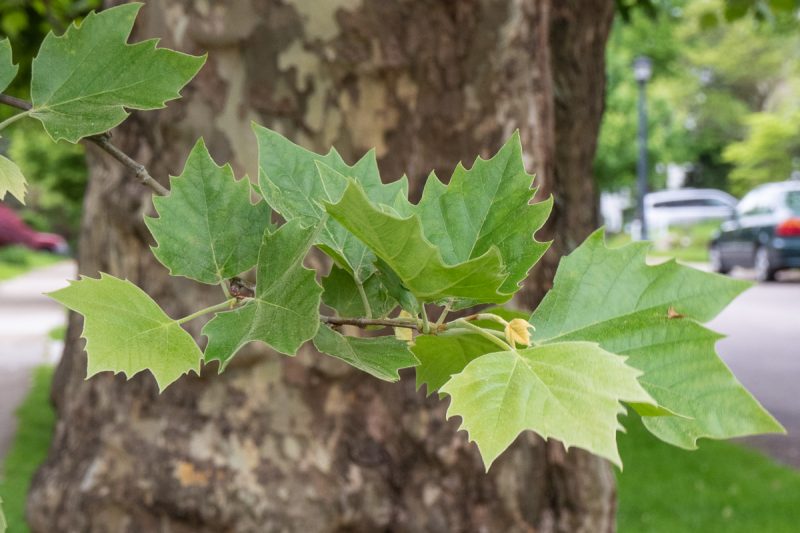 Syamore leaves are palmately lobed, like many maples, but with alternate, not opposite, leaf arrangement.

Common names can be confusing sometimes. In Europe, “sycamore” is the general term for maples (genus Acer), while they call Platanus “plane-tree.”

My next-door neighbors used to have a big maple in front of their house, but it dies, and he replaced it with perhaps the most innocuous of all trees –a thornless male honey-locust, Gleditsia triacanthos. 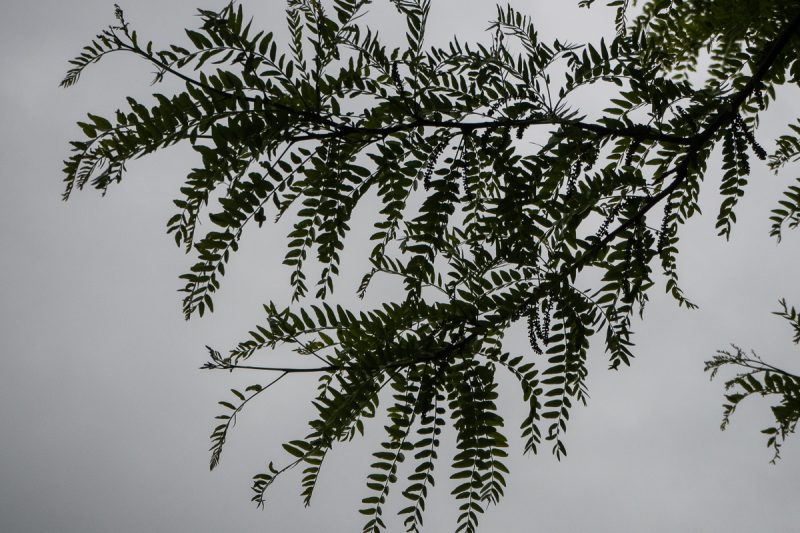 Honey-locust has compound leaves with tiny leaflets –no raking necessary!

Wild honey-locusts are something else altogether; the females produce large strap-shaped “pods” (legumes) that litter the ground shamelessly, and the trunk and branches are thorny enough to ward off mastodons. Indeed, it is believed that they indeed evolved in response to potential predation by now-extinct megafauna. However, the ultra-wimpy horticultural variety here just produces male flowers, seen below as buds. 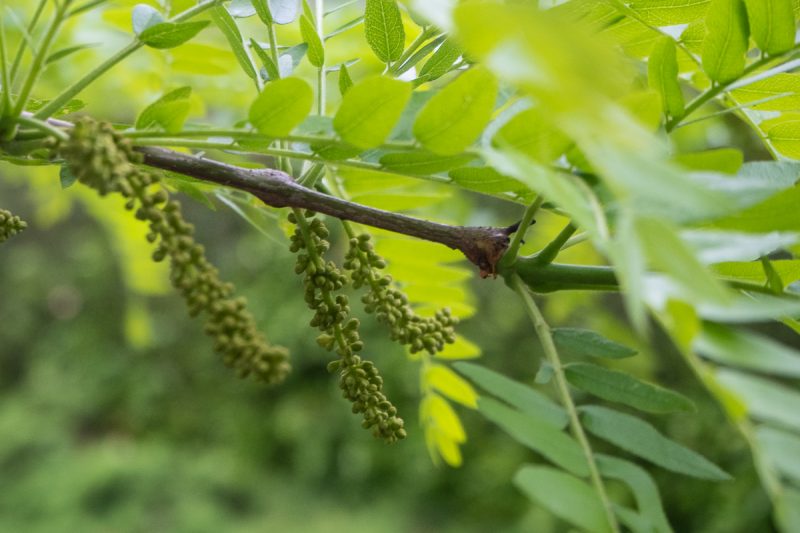 Male honey-locust is preferred by some for planting.

A few years ago, I purchased a dwarf but otherwise native species of tree, river birch, Betula nigra. Full-sized river birches have shaggy bark and are beautiful streamside trees that, like sweetgum, in Ohio occur naturally only in the southern counties. Confusingly, the specific epithet nigra means “black,” but a different birch species altogether (B. lenta) is “black birch.” How did that happen, I wonder? 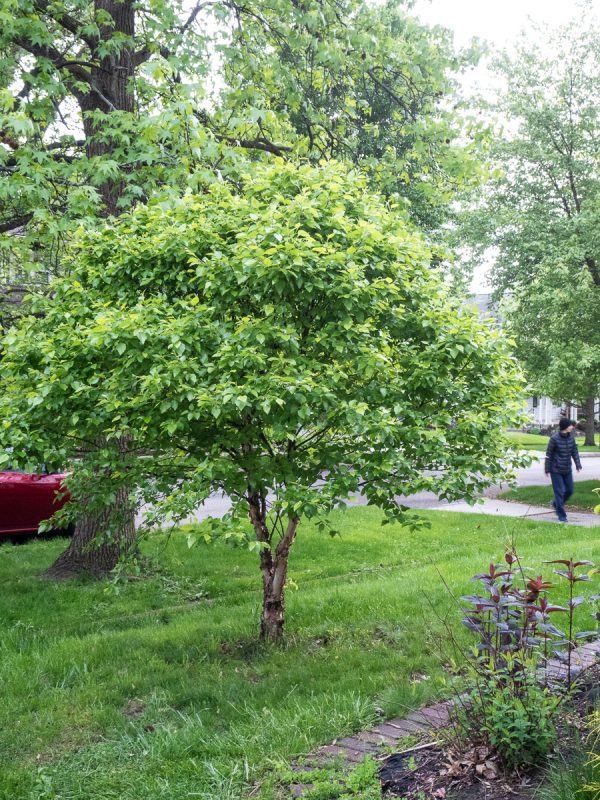 River birch, like many other wetland trees, do surprisingly well in urban areas.

Birch leaf margins have both large serrations and small ones –a feature called “double-toothed.” Petrides, in A Field Guide to Trees and Shrubs (1972) mentions that ruffed grouse and turkey sometimes eat the seeds of river birch. 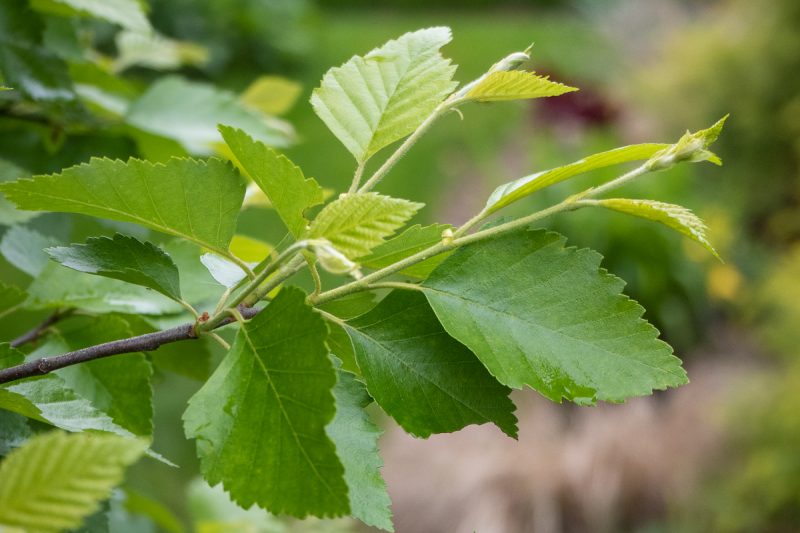 Aww isn’t this cute!? My neighbor put holes in the fence for the dogwood tree, Cornus florida, to grow through! 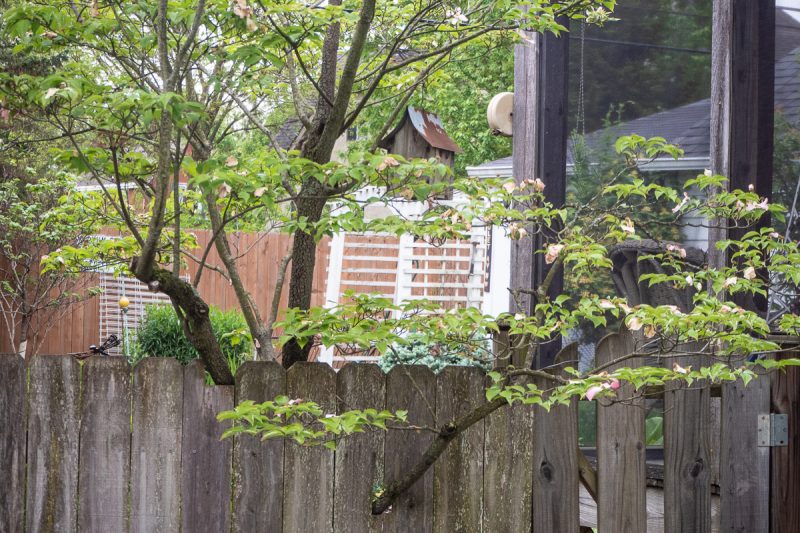 Dogwood trees are opposite-leaved, with an entire leaf margin and veins that are distinctively arcuate. 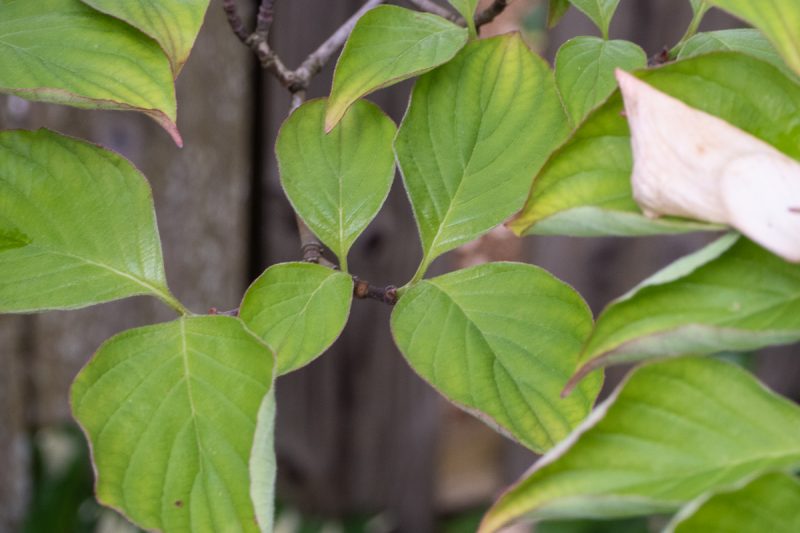 Petrides speaks of many past anbd present human uses of dogwood. Powdered bark was made into a toothpaste, for example, and the bark of the roots makes a scarlet dye. The wood is especially hard and close-grained, and so has been used for golf club heads.

A few years ago our friend across the street dug up a big ornamental grass and put it along the curb free for any takers, and I took it. Over time I realized the grass was an invasive pest, but a nice redbud had become established in the midst of the clump. I managed to herbicide the grass without hurting “Buddy,” and it’s become a nice addition to our yard. 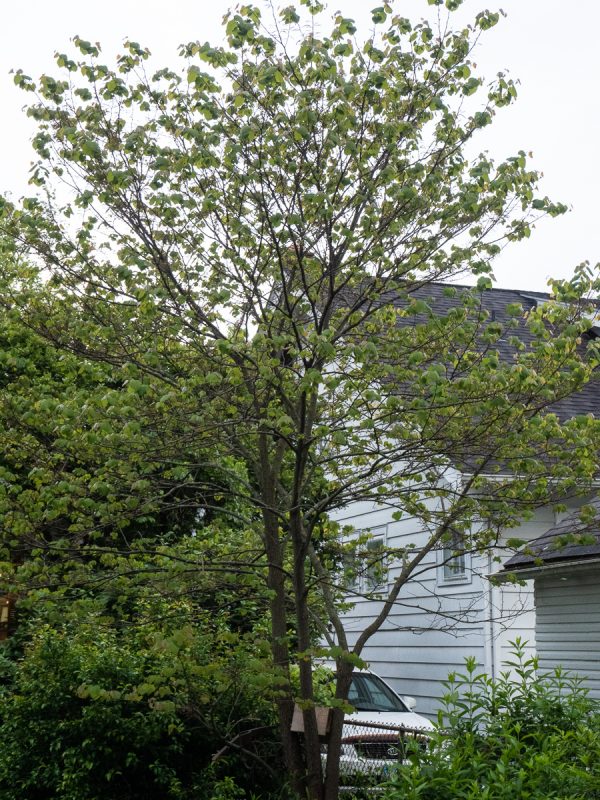 Redbud tree that hitchhiked in a clump of grass.

Redbud, Cercis canadensis, is the tree that Gabriel Popkin features a portrait of in her “Curing youself of tree blindness” article in the New York Times (August 2017), has leaves that are alternate in arrangement, simple in complexity, and entire-margined. The leaf shape is quaintly heart-shaped. 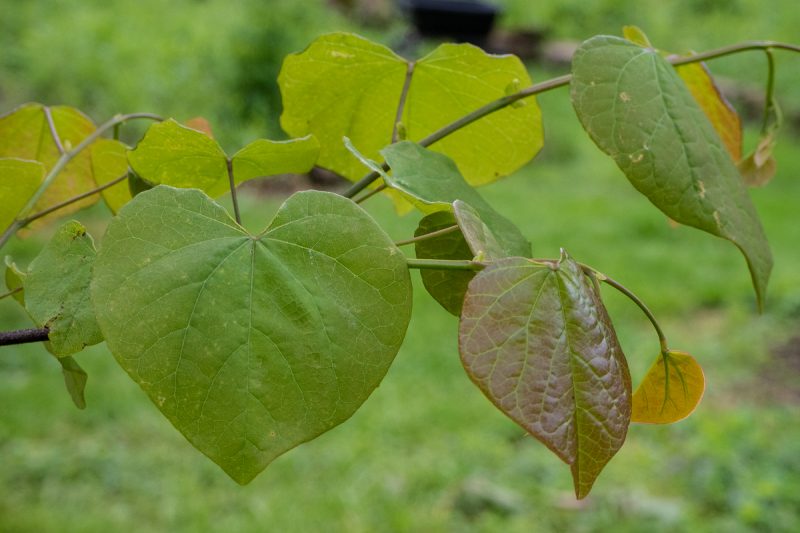 Redbud is a member of the pea family, Fabaceae, and so the fruit is a legume. The legumes are very young and small today. 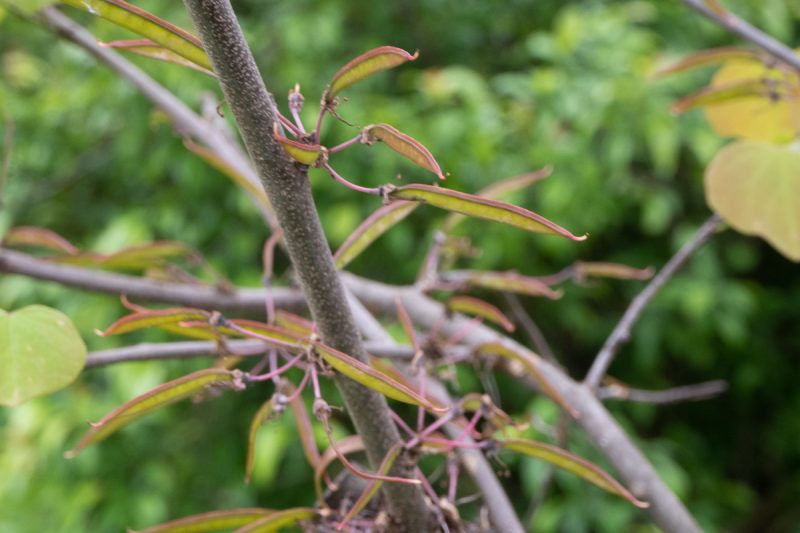 Redbud fruit is a legume.

E. Lucy Braun points out that redbud is our only simple-leaved woody member if the Fabaceae, and is especially abundant on calcareous soils such as those found in the southwestern portion of the state.

Popkin mentions that wild and horticultural trees could provide some food. While it isn’t likely to ever become a substantial part od anyone’s diet, the flowers of redbud, Petrides tells us, are sometimes eaten in salads. Yum!

Oaks (genus Quercus) probably could, conceivably, make up a larger portion of the diet than, say, redbud blossoms, but probably not this oak in our back yard. It’s a shumard oak planted 10 years ago (ish), and hasn’t produced any acorns yet. When it does, they will be more bitter than those of white oaks, requiring boiling in several changes of water to purge the nuts of tannic acid. Better to eat white oak acorns  although even they will require some processing. 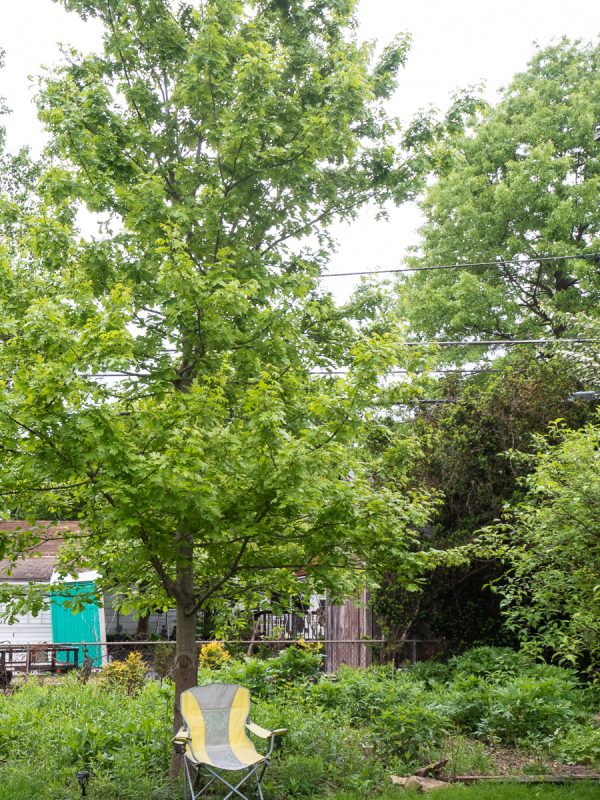 Shumard oak is a member of the red oak group.

Members of the red oak group have bristle-tipped leaf lobed. 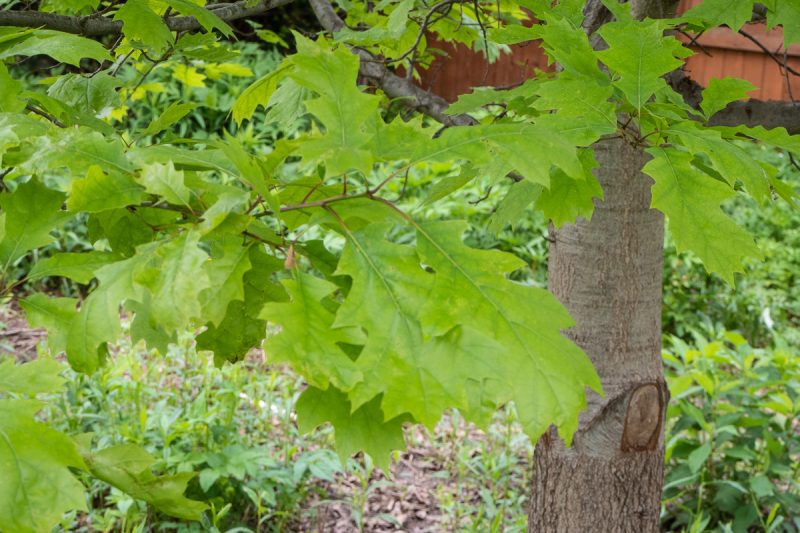 Petrides mentions that oaks provide about half the annual production of hardwood lumber in the U.S.

There are indeed a few trees close by my house that I had not noticed before –maybe even professional botanists are “:tree blind.” Here’s a beautiful black cherry, Prunus serotina. These trees, when mature, can be identified by the “burned potato-chip” appearance of their bark. 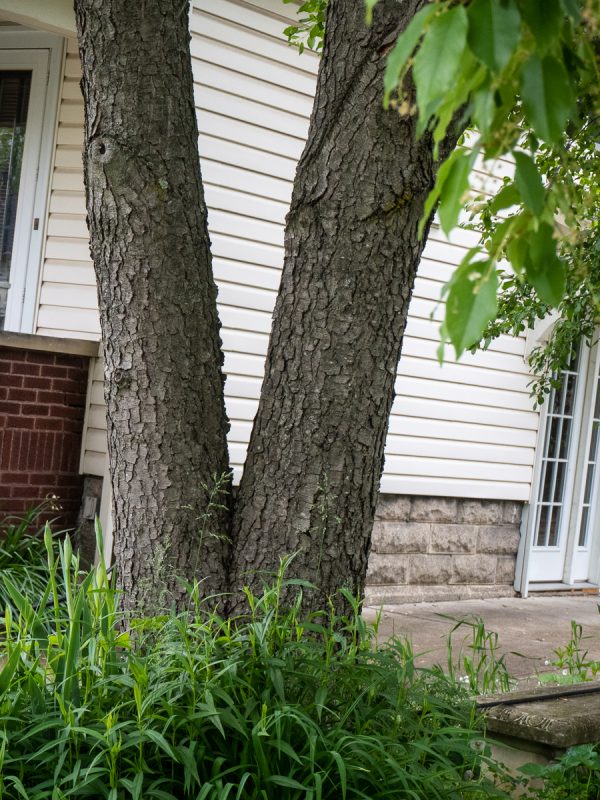 E. Lucy Braun mentions that most large specimens of black cherry have been removed from forest because of its vale as cabinet-wood, said to resemble mahogany.

The leaves of black cherry are not especially distinctive, being elliptical, and serrate. A useful identification clue is found on the petiole (leafstalks); note the glandular bumps near the base of the leaf. 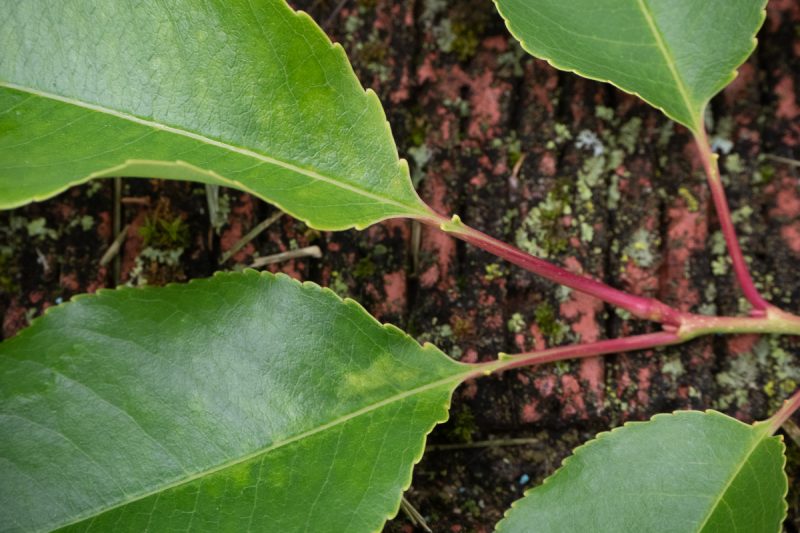 I concur with Gabriel Popkin, that being aware of trees is “more about seeing, and knowing. It’s about not being a stranger in my own country,” or, in this case, my own street!