Last year an ecologist friend mentioned a steep eroding hillside with a sparsely wooded bluff in the vicinity of Battelle Darby Creek Metro Park that he said had some interesting plants growing on it. It is sometimes called the Graessle Road Bluff.

The directions were a bit tricky (Siri had never heard of “Darbydale” even though it’s in Darbydale), but the view was worth it. A steeply eroding bluff!

Since then I’ve visited the place several time, partly because it has interesting landscape and vegetation, and partly because I lost my tripod there and keep hoping that if I retrace my steps I could find it.

I park on London Groveport Road and walk northwest until about where the road bends due west, and then head up to the bluff through a second-growth (or third, or  fourth, or …)-growth woodland dominated by sugar maple (Acer saccharum), passing some wildflowers in the way. 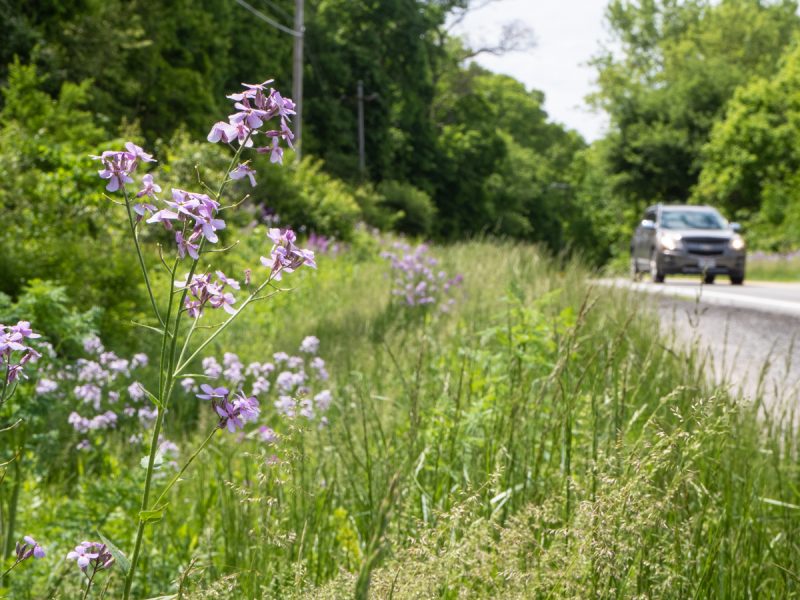 The roadside is occupied by an interesting variety of weeds. On of them is a member of the aster family that flowers in very early spring before the leaves emerge. Its common name, however, is somewhat whimsically derived from the appearance of its leaves. This is “coltsfoot” (Tussilago farfara) –see how they look like horses’ hooves? This plant is a member of the Asteraceae, one of our 8 favorite families. Coltsfoot has been used as a remedy for sore throats; it is especially popular in Europe. 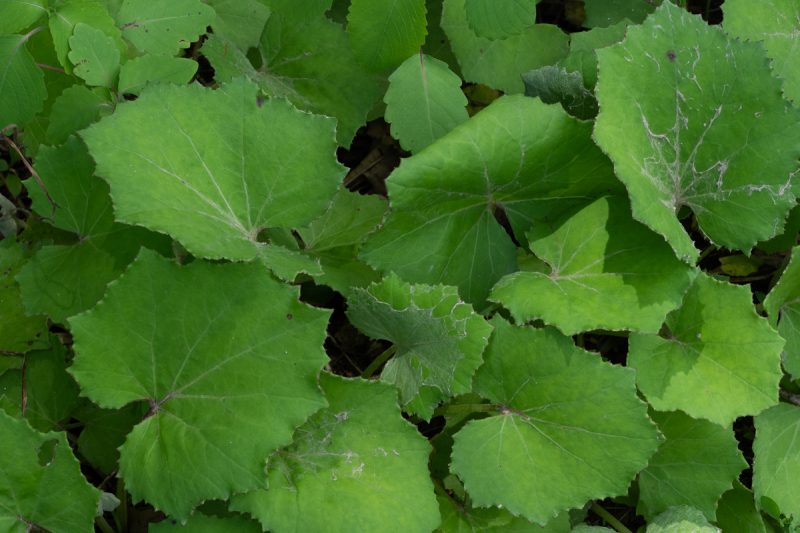 The woods are dominated by sugar maple, but there are occasional examples of other trees. American elm, Ulmus americana (family Ulmaceae) is recognizable by the ovate, doubly toothed leaves with unequal-sided bases. This is our largest species of elm, but it had been decimated by Dutch elm disease, a fungus spread by a beetle. Mature trees, rare but still occurring in a few spots, have a distinctive feather-duster shape. 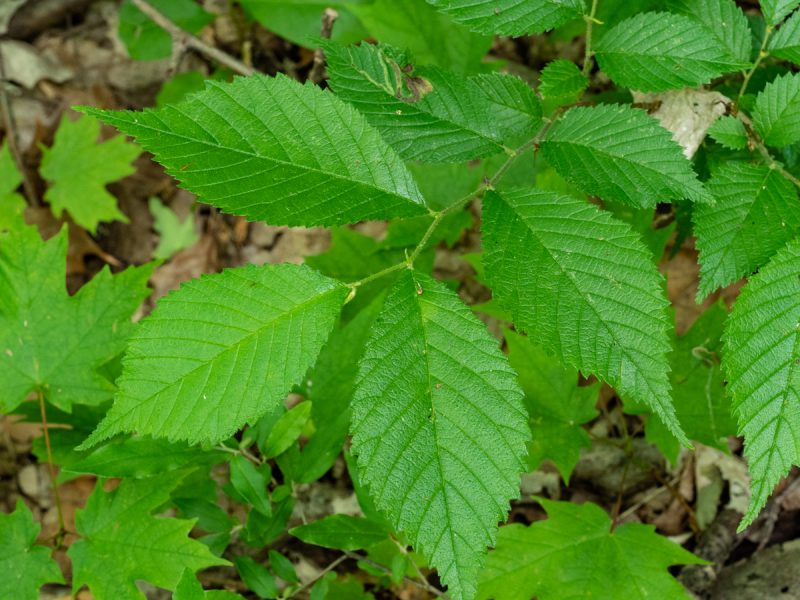 Crap! Here’s a plant we don’t want to see. It’s an invasive shrub called “autumn olive” that, while highly attractive to birds for food, cover and nesting, is one of the most harmful invasive shrubs of our region. It shades and prevents regeneration of forest seedlings, especially in dry oak-hickory woods like this bluff! 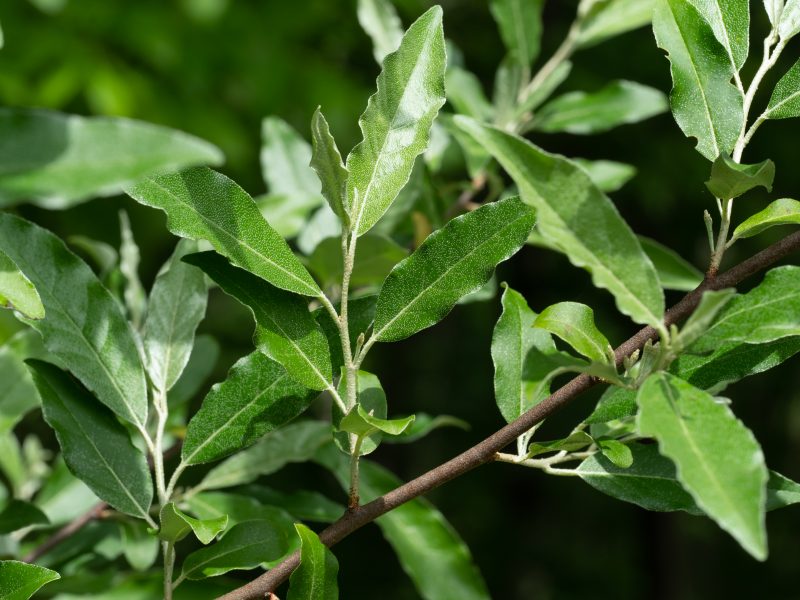 The site has poison-ivy, but not very much. See below a photo of it and a (sort of) lookalike, Virginia creeper, on a tree at a different section of Batelle Darby Metro Park taken before our field trip there. Note how the poison-ivy is trifoliolate. while the creeper has leaves that are 5-part palmately compound. 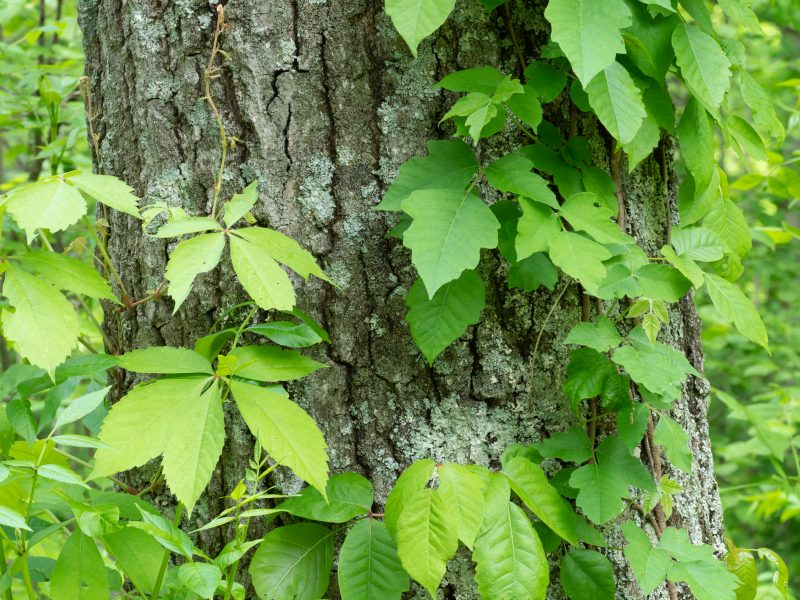 A comparison shot …I love those!

The open woodland adjacent to the bluff is home to a beautiful orchid, lily-leaved twayblade, Liparis liliifolia. The inflorescence is a raceme; the flowers develop into capsules filled with tiny almost dust-like seeds lacking any endosperm. Orchids are dependent on soil fungi for their early seedling development. 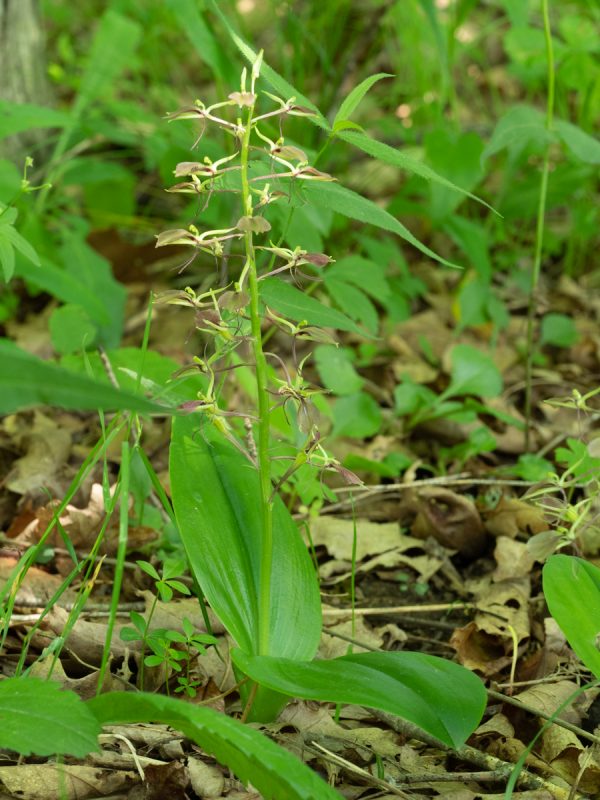 Orchid flowers are cray-cray …they’re upside-down! See the little tornado-like swirliness in the what looks like a flower stalk but is actually the (inferior) ovary? That’s evidence of the 180 degree twisting that occurs in the bud, such that the large and colorful morphologically uppermost (dorsal) petal (the labium or “lip”) is anatomically ventral. The two long dangling appendages are the lateral petals. Sticking up we see the fused sexual parts (the “column”). Pointing backwards behind the column is the morphologically uppermost but anatomically lowermost of the 3 sepals; the other two sepals are narrow and parallel, mostly hidden from view by the overarching lip. The flowers are very advanced, deviating from all 5 of the primitive “FENSH” flower traits. They have fused parts, are strongly zygomorphic, epigynous and bear only 3 sepals and 3 petals. The ovary is syncarpous, consisting of 3 fused carpels. The photo below was taken at a different portion of the park. 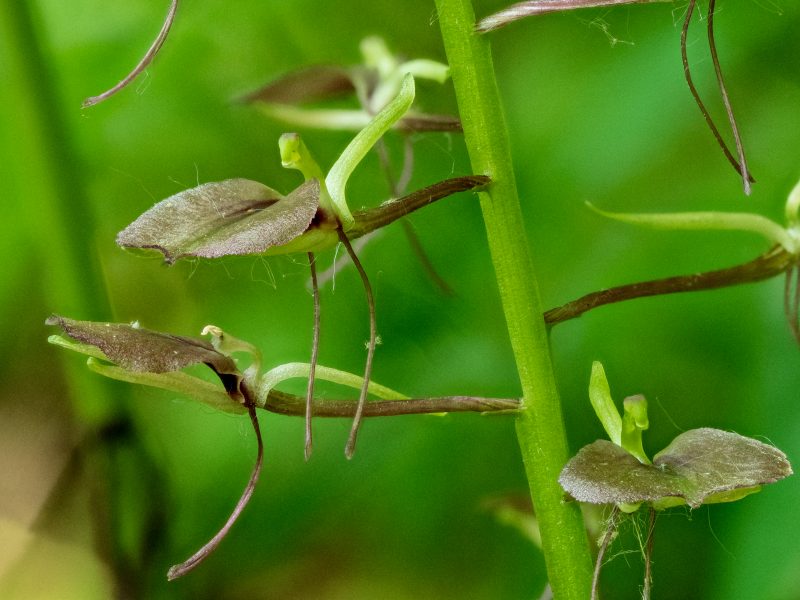 Oooh, ooh! Finally, a mint (family Lamiaceae)! This is “all-heal,” Prunella vulgaris. Despite it’s suggestive common name and a few medicinal uses (leaf tea was used as a gargle for sore throats) this doesn’t seem to be an especially sought-after plant for treating ailments.

These flowers are in a capitulum; they are hypogynous, zygomorphic with fused petals, and, in fruit, present a small cluster of 4 tiny nutlets. 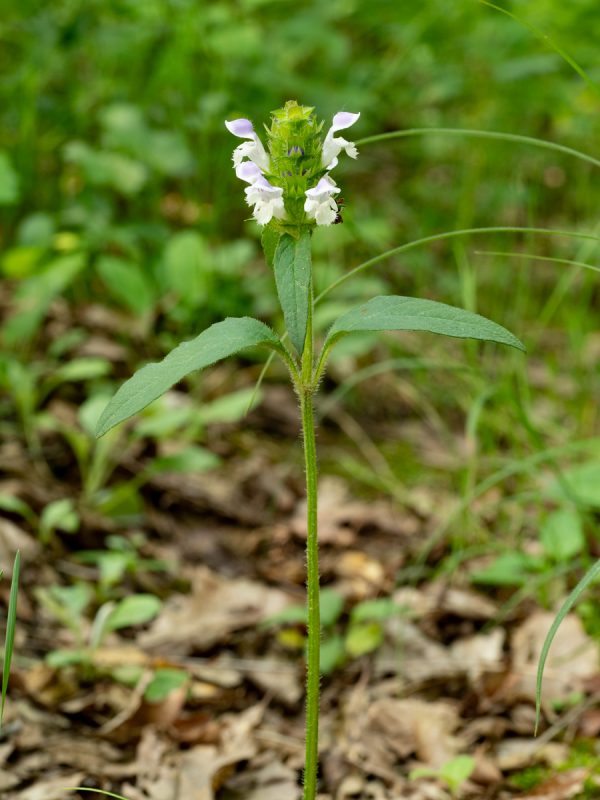 The bluff is thin soil, and apparently subject to drying. Vegetation is thin, and includes some interesting prairie glade species. One of them is a distinctive member of the Apiaceae, yellow pimpernal, Taenidia integerrima. Sparse on the woodland edges along the bluff, the leaflets of the twice-compound leaves of this species have an entire (untoothed) margin, an unusual trait for this family that aids identification. The inflorescence is a compound umbel, and the flowers are 5-merous, radially symmetric, with small separate petals, and an inferior ovary composed of 2 fused carpels that, when mature, splits into two one-seeded units ( a schizocarp). 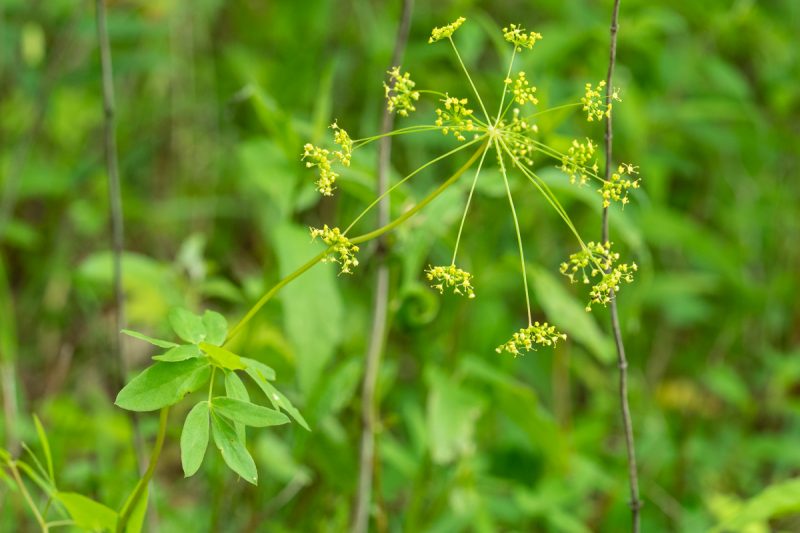 Common cinquefoil, Potentilla simplex is a native member of the Rosaceae. The leaves are palmately compound, with prominent stipules. The flowersare 5-merous, radially symmetric, perigynous (although the small hypanthium is barely noticeable). The gynoecium is apocarpous, with the ovaries each maturing into achenes. The inflorescence is solitary and axillary. 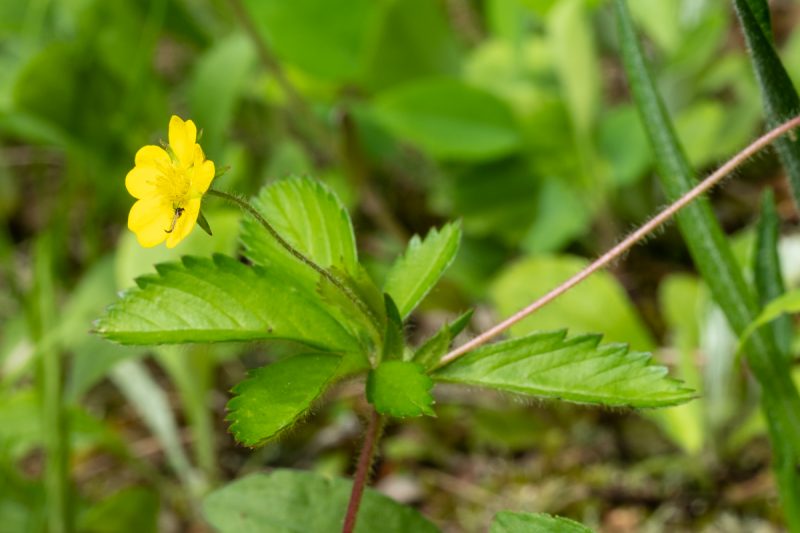 An open spot on the bluff is a good substrate for mosses and lichens. Early June is a good time to view Ohio haircap moss, Polytrichastrum ohioense, because the eponymous hairy calyptra is evident now. 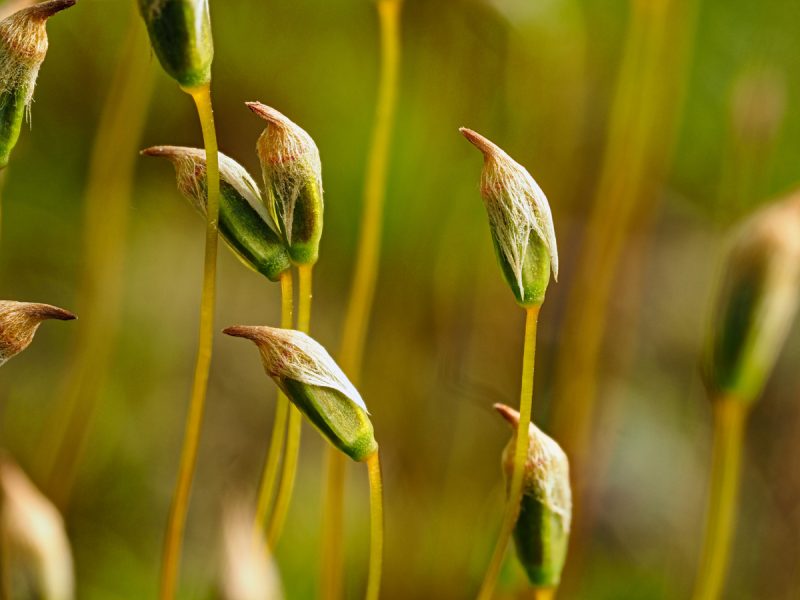 It’s also a nice time to see “broom moss,” Dicranum scoparium, as it is just developing sporophytes; they are in young stage where they look like little spears. 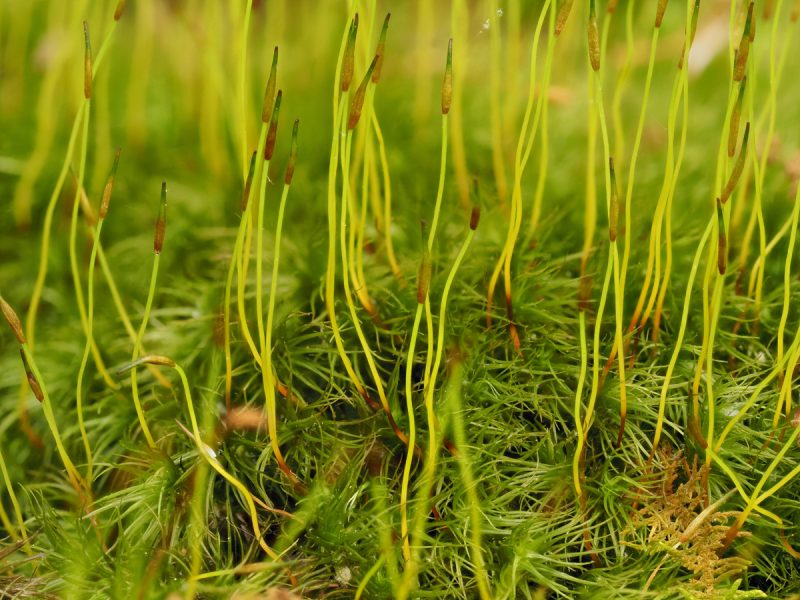 One of the reindeer lichens, Cladonia furcata is especially abundant here. This lichen is distinguished by the dark gray color, and (look closely) the little squamules on the podetia. 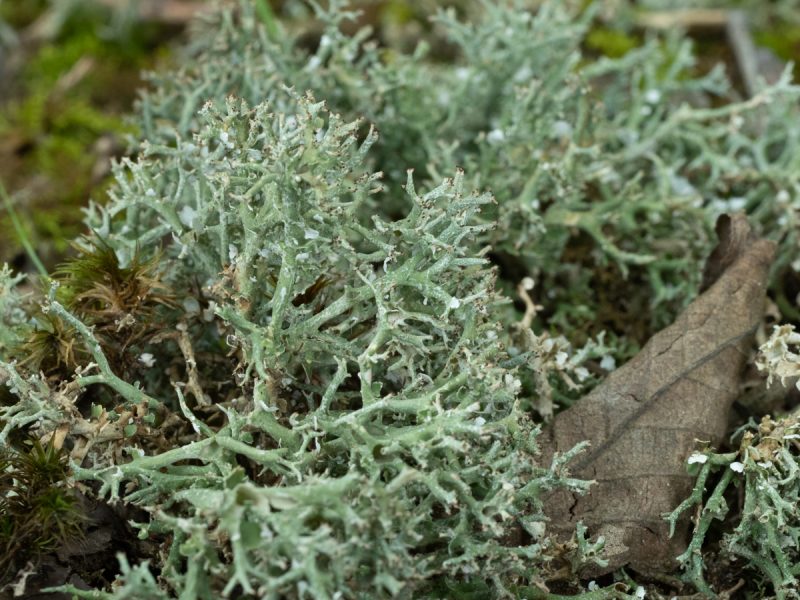 Cladonia furcata is a reindeer lichen.