While flower-hunting for specimens for class, a number of unusual ones were seen that asked to have their pictures taken.

On September 9 I visited Slate Run Metro Park Wetlands in hopes of finding a flowering member of the rose family (Agrimonia parviflora) that I heard was there in great numbers. Nope, not in flower anyhow: (I did see two sandhill cranes though!) One roseaceous plant did catch my eye, an actual rose, in fruit. It’s swamp rose, Rosa palustris, a lovely native rose with a fidelity to wetlands. 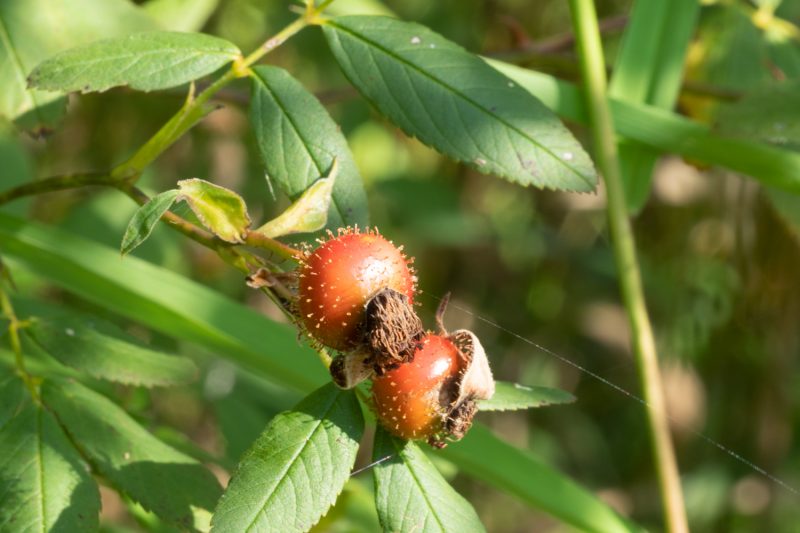 Rose fruits are kinda weird, something termed a “hip,” or “synconium.” The rose flower is perigynous and apocarpous, with the many spirally-inserted carpels inserted on a receptable closely surrounded by a flask-shaped hypanthium. The hypanthium becomes somewhat fleshy (and a terrific source of vitamin C when made into a refreshing tea) surrounding the many dry achenes (the actual fruits).

Much of the Slate Run site is a restored tallgrass prairie where one of the prominent prairie grasses is in full flower. This is Indian grass, Sorghastrum nutans, at a time of the year when you can plainly see that grasses have flowers! Being wind-pollinated, they lack colorful petals and sepals (or any petals and sepals for that matter). The are enclosed by tiny bracts (glumes, lemmas, and paleas) and, when in flower, the relatively large stamens dangle in the breeze releasing pollen, while the stigmas are exert, feathery as can be to snag wind-blown pollen. The grass inflorescence is a tiny spike (a “splkelet”) that is presented in some type of secondary inflorescence, in this case a panicle (branched and branched again…eek…this is a perfect time to panic!). 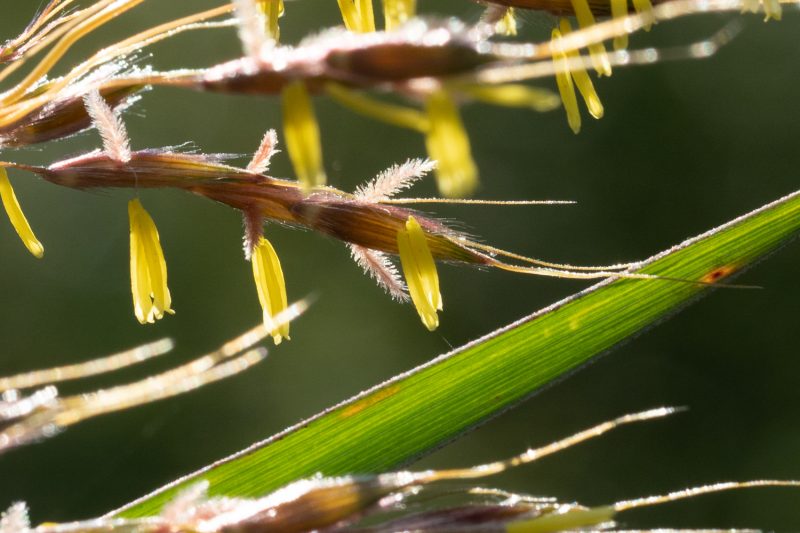 Yesterday, September 11, 2019, at Wahkeena Nature Preserve in southern Fairfield County, a small orchid was in bloom. This is autumn coral-root, Coralolorhiza odontorhiza, an orchid. The plants are leafless, and the flowers are presented in a raceme. 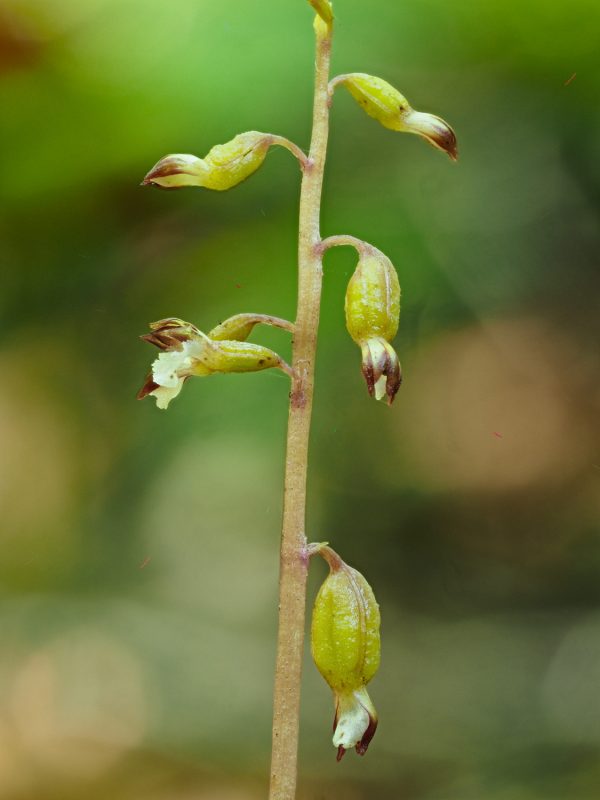 Orchids have the most highly modified flowers, departing from all 5 of the primitive “FENSH” traits. The ovary is inferior, the petals are fused, and bilaterally symmetric (zygomorphic). Moreover, the flowers are (in most genera) twisted 180 180 degrees (“resupinate”) such that the petal that is developmentally lowermost, is presented uppermost. The sexual parts of the flowers are fused into a compound structure, the gynostegium, and the pollen, instead of being distributed as individual grains, is coherent into waxy masses called “pollinia” that are transferred en masse to receptive flowers sufficient to pollinate all of the ovules in an ovary.

Orchid seeds are tiny dust-like affairs, lacking endosperm, and so require an association with mycorrhizal fungi from the get-go. Some orchids, including this coral-root, are wholly mycoheterotrophic throughout life, being non-photosynthetic, deriving all their nutrition from their fungal partner.

The trail between where you park at Wahkeena and where the wee little orchid is passes alongside a pond with a nice border of wetland vegetation. One of the plants there is my favorite flower, one that I studied in great detail for my dissertation. It’s swamp rose-mallow, Hibiscus moscheutos. It flowered in July and August; now there are fruits aplenty borne single in the axils of the upper foliage leaves. The fruit is a 5-carpellate capsule that splits longitudinally to release about a 100 round hard seeds. 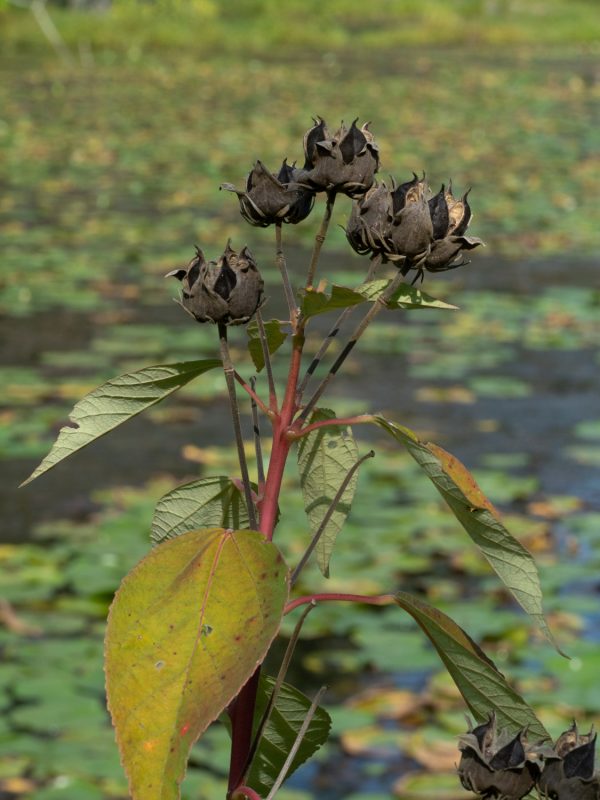 This angle shows better the 5-parted nature of the syncarpous gynoecium that gace rise to this capsule. 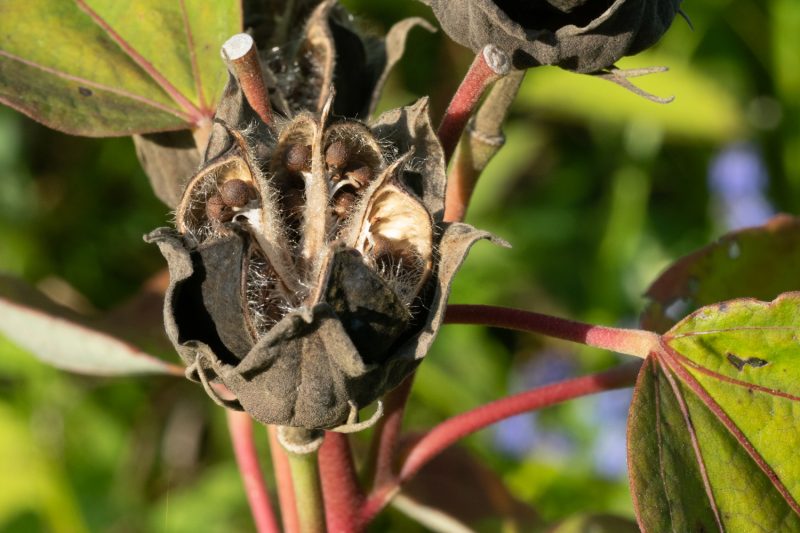 The rose mallow fruit is a 5-loculed capsule.

On September 10, 2019, I stopped at Mt. Gilead State Park in Morrow County. The first thing I noticed was this sign that seemed inappropriate for a nice park like this. 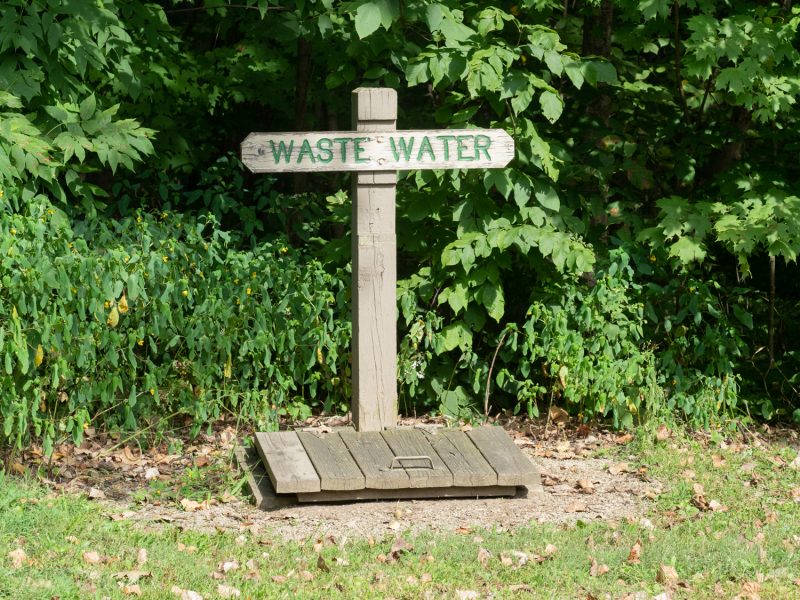 Not a very good conservation ethic, is it?
Shouldn’t we try to conserve water?

There, a wooded hillside was home to a low-growing member of the Asteraceae, zigzag goldenrod, Solidago flexicaulis. As a member of the aster family, the flowers are individually tiny, aggregated into little capitula (heads); the heads are arranged in a compact wand-like panicle (sometimes termed a thyrse. 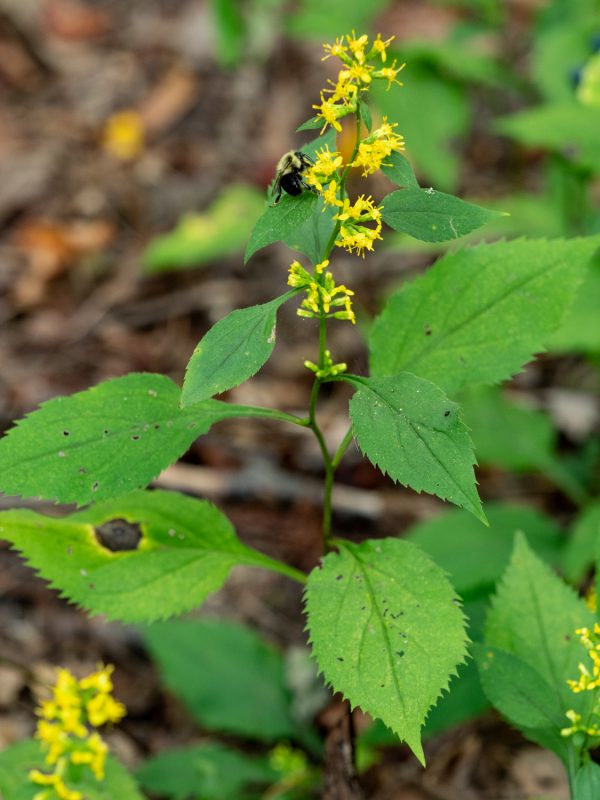 Zigzag goldenrod is a woodland wildflower.

Ohio is home to 24 species of goldenrod, all but one of which are native.  All have alternate leaves and small discoid capitula. This species is distinguished by its large, ovate, serrate leaves. Goldenrods, being showy, are insect-pollinated, and do not have air-borne pollen. Flowering the same time as the allergy-provoking but inconspicuous ragweeds (genus Ambrosia, also a member of the aster family), goldenrods are often falsely accused of being noxious.

At the base of the Mt. Gilead wooded slope is a wetland that was a swamp forest until the emerald ash borer did in the ashes there. An obligate wetland species there is a low-growing herb in the Saxifragaceae (saxifrage family), ditch stonecrop, Penthorum sedoides. The petal-less flowers have 5 equal-sized sepals (radial symmetry), 10 stamens, and 5 separate carpels that mature into follicles. The infloresence is a determinate one –a cyme –arranged in a pair, looking elegantly arcuate. 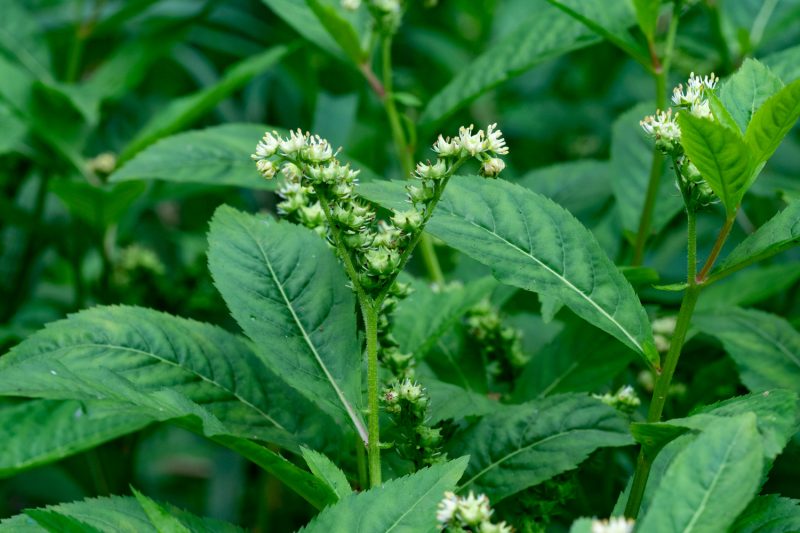 Ditch stonecrop is a wetland herb.

White baneberry, Actaea pachypoda is a woodland wildflower in the Ranunculaceae (buttercup family) with a fun other name: doll’s eyes. The fruit is a spooky-looking white berry with a dark tip presented in a raceme. 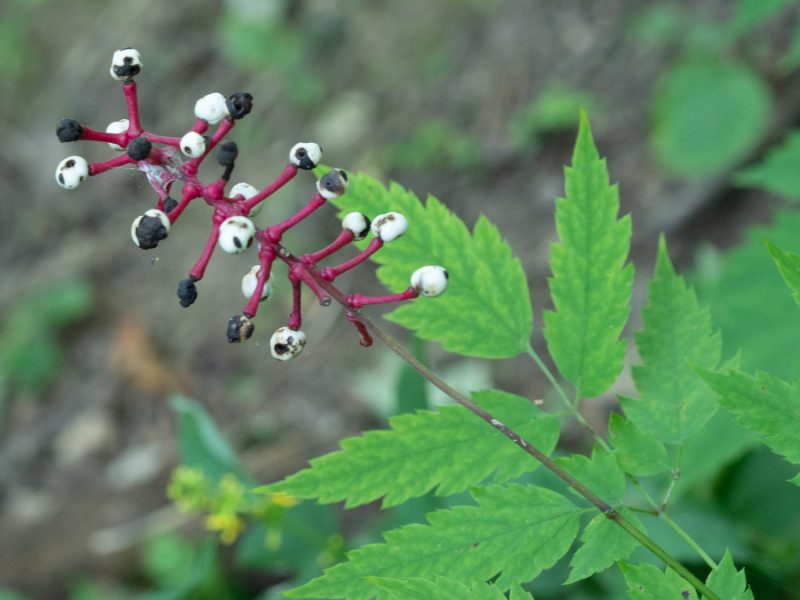 Doll’s eyes looks like something from The Twilight Zone!

After a lot of time away from home, it became apparent the weeds were having a field day themselves alongside the driveway and sidewalk. An inconspicuous plant that I photographed before pulling it is three-seeded mercury, Acylypha rhomboidea. This is a member of the spurge family, Euphorbiaceae, many of whose members have highly modified flowers. The flowers are unisexual, with both the male and female flowers petal-less. The males consist of just a few stamens; the female is a 3-loculed carpel supported by a short stalk that matures into a 3-lobed capsule, with one seed per locule.. The two flowers appear side-by-side surrounded by a several-lobed leafy bract. The leaves are alternate, simple. 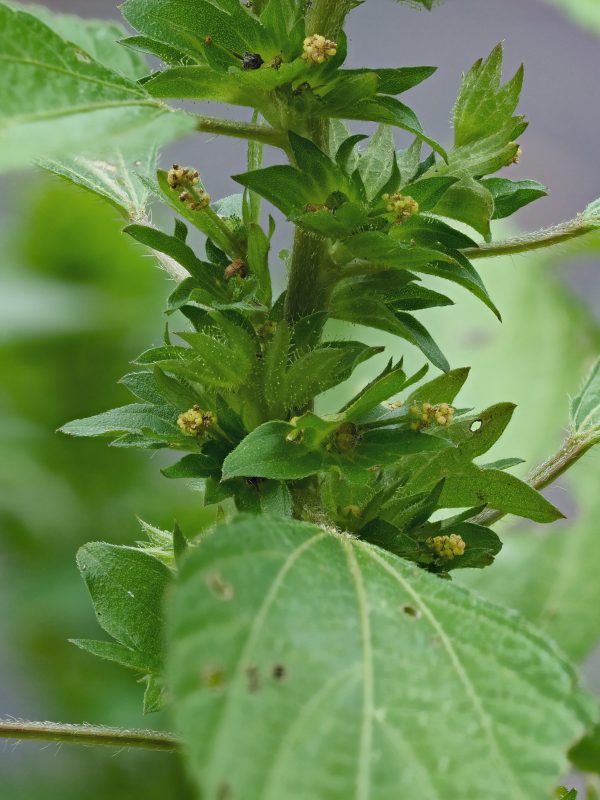